Alleged drinking, drug use led to encounter in backyard 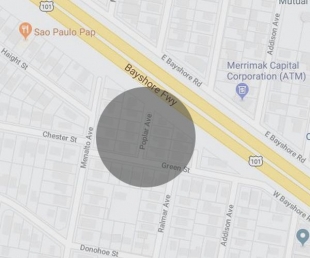 A 42-year-old man was shot by his 26-year-old son in a case of mistaken identity in the 2100 block of Poplar Avenue in East Palo Alto on Sept. 14. Image courtesy Google Maps.

This is a very unfortunate situation. However, with regard to the reporting, it's very substandard. How can a short article mention that the father was 42 years old so many times? I was thinking of subscribing. When the editing of the stories improves I may consider. Sorry, but not now.

TLM is a registered user.


@a subscriber?
I assume the writer mentions the 42 year-old's age so many times because his name was not released, and both men involved in the case are described as 'fathers', so that was the distinguishing feature between the 26 year-old, who was named, and the nameless 'father', who was 42.

Possible? Not likely from the facts mis-printed here.

Sad what happened to this family. What surprised me is that finally something came out in the news because last shootings in EPA havent been reported.

Report Objectionable Content
Email Town Square Moderator
25 people like this
Posted by Math about Good Guys with Guns
a resident of Crescent Park
on Sep 18, 2019 at 8:00 am

Keep a gun in the home, and it's 11 times more likely to harm a loved one than be used in self-defense.

No matter which side of the freeway the event occurred.

Report Objectionable Content
Email Town Square Moderator
3 people like this
Posted by Fair
a resident of Mountain View
on Sep 19, 2019 at 9:58 am

The gun did it! With these two clowns if there wasn't a gun one of them would have got a knife. Knifes are stealthily, cheap, concealable and do not set off, "ShotSpotter."

92% of domestic/family abusers were using alcohol. Out of those, 61% had substance abuse problems according to the Department of Justice.

I guess the liquor and illegal drugs had no play in this.

Report Objectionable Content
Email Town Square Moderator
3 people like this
Posted by CrescentParkAnon.
a resident of Crescent Park
on Sep 22, 2019 at 7:46 am

>> Keep a gun in the home, and it's 11 times more likely to harm a loved one than be used in self-defense.

Is it the gun that is the problem or that so many people are forced to live with and have in their lives "loved ones" who are not "loved ones"?

Report Objectionable Content
Email Town Square Moderator
2 people like this
Posted by Math about Good Guys with Guns
a resident of Crescent Park
on Sep 22, 2019 at 8:27 am

> A gun in the home is 11 times more likely to be used to harm a loved one than in self-defense.

Perhaps not. Given that a gun is 11 times more likely to be used to harm a loved one than in self-defense, perhaps it's the ability for over-emotional gun lovers to see facts so simply put.

Self defense - once
Harm a loved one - eleven times

And these guys can't get their hand off their barrel long enough to see they are emotionally attached to something that logic tells us is clearly unsafe? Are they trying to make up for weaknesses in other areas?


Report Objectionable Content
Email Town Square Moderator
3 people like this
Posted by CrescentParkAnon.
a resident of Crescent Park
on Sep 22, 2019 at 5:40 pm

> Self defense - once
> Harm a loved one - eleven times

Those are the cold numbers, but they really do not go into the
facts of each of these cases.

I think there are a lot of really sick, dysfunctional, mean, and
unbalanced people ... by 11 to 1 in the world, in this country,
than healthy individuals.

Is that the problem then? There are so many more maladjusted,
dysfunctional families and relationships then there are responsible
gun owners who own weapons to defend themselves?

Depending on how you look at it, it would be even more of a danger
to realize how many of those maladjusted people take their mental
problems out on others. Is it good that they harm their own loved
ones or should they harm innocent strangers?

We have a violent, sick society based on dehumanizing other people
and lying and tricking them and stealing from them. Again, maybe
thinking that guns are the whole of the problem is superficial thinking.

By the way I do not now and never have owned a gun, but under
certain circumstances I would like to have the freedom to get one
if I ever deem it necessary.

The point is those statistics are always twisted by both sides of
every issue to try to influence how we look at different issues, and
of course our predisposition to not think, and to rely on feelings and
confirmation bias is powerful. It is so easy to turn down what other
people are saying or even find clever ways to insult them than it is
to wonder what information is missing, and what statstics really mean,
and what a fair reaction should be.

Report Objectionable Content
Email Town Square Moderator
2 people like this
Posted by CrescentParkAnon.
a resident of Crescent Park
on Sep 22, 2019 at 5:57 pm

Also ... by the way, that is not math, that is not logic, that is not
modeling ... that is simple arithmetic based on you don't know
what statistics.

The US does not keep or at least does not disseminate the stats
on things like this. I remember when Michael Brown was shot
by the police officer in Missouri we all found out there was no
central place where police shootings were reported and studied.

Why do people settle on these fake second hand reports and
numbers that none of us know where the came from or how they
were gathered or interpreted?

Maybe look a the neighborhoods or socio-economic factors
of these shootings because this is not just a question of
arithmetic.

Report Objectionable Content
Email Town Square Moderator
2 people like this
Posted by Nick
a resident of another community
on Sep 23, 2019 at 2:27 pm

Report Objectionable Content
Email Town Square Moderator
3 people like this
Posted by HUTCH 7.62
a resident of Portola Valley
on Sep 23, 2019 at 8:38 pm

It’s always the Guns fault. Never the person. Wonder how many Cars killed people today, or how many Doctors killed or maimed their patients.

Alcohol, drugs and guns are a dangerous mix.

Anne Le Ziblatt, formerly of Tamarine and Bong Su, is back with a Vietnamese noodle bar in Redwood City
By Elena Kadvany | 7 comments | 3,384 views