Dragon play is a family dramedy and surreal fantasy 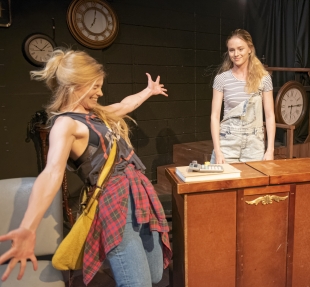 Sarah Haas and Zoey Lytle play a mother and daughter who are both 17 in Dragon Productions Theatre Company's "Hickorydickory." Photo by Lance Huntley.

The term "biological clock" is a common one, both in scientific and symbolic terms. In the imaginative world of Marisa's Wegrzyn's "Hickorydickory," on stage now at the Dragon Theatre, though, human bodies are hosts to actual, physical "mortal clocks" -- looking and working much like mechanical pocket watches -- that count down the days to each person's death.

These fateful timepieces are generally housed near the heart and unknown to the majority of the population, but an unlucky few are born with them lodged in their brains, where they can feel and hear them tick-tocking away their mortal minutes. This, understandably, is depressing at best, maddening at worst. The mortal clocks can, with the help of a clock expert and a delicate operation involving esoteric potions, be removed, seemingly without harming either the body or the clock. They can also, although it is not advised, be tinkered with externally, but this can come with some devastating side effects.

Within the aforementioned, mortal-clock-existing world, "Hickorydickory" is set in a suburban Chicago clock shop, owned and operated for generations by the Wicker family. The play takes place, according to the program, in two time periods: 1992 (the first and third acts) and 1974 (Act 2).

In the '90s, 17-year-old Dale (Zoey Lytle) lives with her clock-repairing, doting dad Jimmy (Troy Johnson) and her responsible and loving stepmother Kate (Allie Bailey). Dale has never known her biological mother, Cari Lee (Sarah Haas), Jimmy's high school sweetheart and local wild child, who left newborn Dale with Jimmy and fled. Capable Kate stepped in to raise her as her own.

Innocent and bright, Dale sees no future for herself thanks to the mortal clock in her head, reminding her she is doomed to an early death. Despite this, she develops a crush on Rowan (Jonathan Covey), the young Irish apprentice working in the clock shop. One day, she asks for his help repairing a mysterious pocket watch engraved with her mother's name. He tries, and the thing starts bleeding. Yep, turns out it's actually her long-lost mom's mortal clock, removed and squirreled away by Jimmy 18 years earlier. Tinkering with it summons Cari Lee back to the shop. Oh, and she's still only 17 years old.

What happened, it transpires, is that young Jimmy, in a desperate attempt to prevent Cari Lee's death (presumably in childbirth), tried to manually add time to her mortal clock -- ostensibly a big, cosmic no-no. This went terribly awry, leading to, among other unintended consequences, stopping Cari Lee's clock altogether, leaving her stuck as a perpetual teen. Cari Lee wants her clock restarted, Dale wants the maddening mortal clock removed from her head ASAP, and Jimmy and Kate are desperate to find a way to add time to Dale's shortened lifespan.

Back in 1974, we see young Jimmy (now played by Covey) and Cari Lee, as well as his parents, Richard (played by Johnson) and Helen (played by Bailey). Young Kate in this era, nursing a crush on pal Jimmy, is played by Lytle. Here, we learn a bit more about the workings of the mortal clocks, and that Helen, too, used to have a stopped one, which Richard repaired. Their relationship is tumultuous and intriguing, with Helen having led a long (like, really long) life worthy of a prequel. I'd quite like to know more of the backstory there.

The show returns to the '90s to catch back up with the players and their conundrums. We learn, among other things, that maybe mortal clocks are not "tethered" entirely by genetics, fate or blood but by, to quote Huey Lewis in a classic time-centric tale, the "Power of Love."

"Hickorydickory," clocking in at around three hours, is a long play. Too long. Though the opening-night audience was enthused and invested, you could feel the energy getting restless after the second intermission.

There also seem to be some anachronistic references in Wegrzyn's script (renting home movies in 1974? Downloading songs, burning CDs and seemingly making "Harry Potter" nods in 1992?). Maybe they're meant to establish the alternate universe/timeline, but they're distracting and cutting those out, among other superfluous bits, would save a welcome bit of time. And its internal logic didn't always add up for me. Why does monkeying around with the clocks sometimes lead to immortality and sometimes death? It's best to think about it all on an allegorical rather than literal level.

While I like the wide array of clocks on stage as part of Tom Shamrell's scenic design, from my seat in the house-right section, the barrier bifurcating the set and separating the clock shop from the outdoors (as well as serving as furniture later on) made for an awkward transition space for the actors to make their way around.

Nitpicks aside, it's another mind-bending and clever choice by the Dragon, directed by Kimberly Ridgeway and with good work by the cast. Despite the sci-fi themes and some dark moments, it's also a comedy, with Haas given the most humorous lines as bad-girl Cari Lee. Cari Lee is an extremely irritating character but Haas is talented enough to make her bearable. It's a nice touch that Lytle, in the '70s sequences, plays the younger version of her stepmother Kate, underscoring the idea that the maternal ties that bind are not necessarily the biological ones; that nurture may be just as important as nature.

It's really quite annoying when reviewers spill the entire plot of a show. We need to treat theatre with the same respect we give TV shows - give a spoiler alert, and do your best not to communicate the essence of your experience of the play without ruining it for others.

*do your best to

A Pragmatic Approach to A Trillion Trees
By Sherry Listgarten | 4 comments | 4,053 views

Singapore's oldest cafe was about to open in Palo Alto. Then, the coronavirus hit.
By Elena Kadvany | 1 comment | 3,282 views

Repairing a Disagreement with your Beloved & “Physical” vs. “Social” Distancing
By Chandrama Anderson | 2 comments | 2,729 views

The University of California’s flexible policies during COVID-19
By John Raftrey and Lori McCormick | 6 comments | 2,664 views