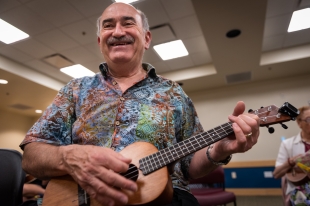 Gary Guiffre is a regular participant of the ukulele class. Photo courtesy of Federica Armstrong.

Playing music is a great way to keep your mind active as you age, which has many physical health as well as mental health benefits.

Which is the best product among those listed in this site?
Web Link