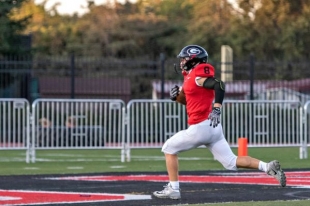 Eitan Smolyer scored a pair of touchdowns for the Titans. Photo by Butch Garcia.

It took just the first quarter Friday night for the Gunn High School football team to accomplish one of the goals that drove their summer workouts.

The Titans scored 28 first quarter points on the way to a 42-0 victory over the visiting James Lick Comets that served to avenge last season’s 52-36 loss to Lick. It gives Gunn a 2-0 start for the first time since 2012.

“They physically dominated us last year,” said Gunn coach Jason Miller. “We looked forward to redeeming ourselves this time. We had a full off-season of preparation and the team worked really hard. They are adapting to our system and guys have made a commitment to brotherhood and working to change the culture of Gunn football.”

This season’s start is the type that can change a culture. Gunn has scored 101 points and allowed 34. The ground-based offense shows strength, speed and depth.

Lick last week won its opener against South San Francisco, 41-7, so it entered the game on an up-note. But in a reversal of last year’s game, Gunn imposed its will on Lick. Gunn scored touchdowns the first five times it touched the ball.

The Titans went 53 yards on four plays on the first drive capped by a 1-yard plunge by quarterback Aiden Everett.

After a forcing a three-and-out, Gunn scored on a 60 yard pass to Kylen Liu from Everett.

Cory Hallada scored next, sprinting for a 58-yard score. Eitan Smolyer scored next, bursting 40 yards for a touchdown for a 28-0 first quarter lead.

Meanwhile, James Lick was struggling to stay on the field. Four players left the field during the first quarter and the Comets were reduced to 13 able players. As a result, a running clock was used from the second quarter on. Gunn used the opportunity to play its roster and the JV players it had called up for the game.

One of the JV players, Kevin Green, had a 55-yard run in the fourth quarter and moments later scored a touchdown from the 4 to cap the scoring.

Gunn’s defense was equally dominant. The Titans allowed the Comets two first downs – one in each half. Lick rushed for 22 yards – and that included a 40-yard quarterback run - and passed for 26. Jack Dellenbach and Tomar Glazer both intercepted passes for Gunn.

No Gunn team has won its first three games in more than 15 years. The 2012 team that won its first two games went on to finish 7-3. Gunn next week hosts Yerba Buena, a West Valley League rival of James Lick, which didn’t open their season until this weekend.

next year's scheduler (for non-conference games): get to it, chop chop!

It’s exciting to realize that the Gunn Titans have took hold of Coach Miler’s “double wing” offense and paralyzing the opposing team.

Report Objectionable Content
Email Town Square Moderator
4 people like this
Posted by Real Slim K
a resident of Midtown
on Sep 10, 2019 at 6:44 am

The first few seconds after awakening; before I remember the virus
By Chandrama Anderson | 0 comments | 3,354 views

Can you stay healthy without making more trash?
By Sherry Listgarten | 6 comments | 2,767 views

Think about helping others in our coronavirus-affected area
By Diana Diamond | 7 comments | 2,556 views