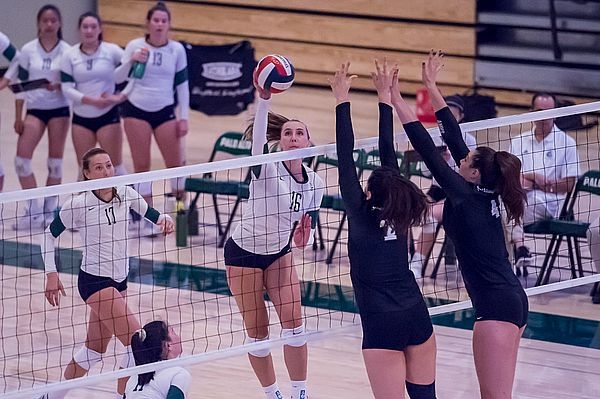 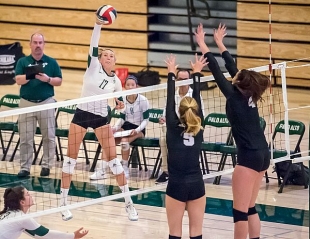 Amelia Vugrincic had 14 kills for the Vikings. Photo by Jenna Hickey.

Palo Alto senior middle blocker Amelia Gibbs loves the new additions to the Vikings girls' volleyball team this season and if Thursday's dramatic 25-21, 25-14, 19-25, 24-26, 15-13 home victory over perennial powerhouse Mitty is any indication, the feeling is mutual.

Kylie Mies sets for Palo Alto. Photo by Jenny Hickey.
First-year Vikings coach Chris Crader is no stranger to Bay Area volleyball. He came to Palo Alto after eight years at Carlmont, six years previous to that at Menlo School and coached a couple of years at Castilleja among other local schools, club teams and with the Stanford men's volleyball program.

When he arrived on campus, he saw a talented group of players and decided they needed to be put to the test. So he scheduled three West Catholic Athletic League teams and entered the Branson Elite Eight Tournament, where the Vikings (2-0) meet Monte Vista Danville, Campolindo and Marin Catholic, a gauntlet of top tier teams, on Saturday in pool play.

As of Thursday, Palo Alto's next five scheduled opponents are a combined 18-1 on the season. Spikefest titlist St. Francis visits Paly on Tuesday and the Vikings open SCVAL play next Thursday against currently undefeated Mountain View.

"We're still putting it together and they keep getting better," Crader said. "Mitty put a lot of pressure on us."

The Monarchs (4-2) are known for being in the right place and for being technically sound. They don't usually beat themselves and in the final three sets, served well enough to put the Vikings on their heels.

And still Palo Alto did not crumble. In the fourth set, Mitty scored eight straight points and 10 of 11 to forge a 15-12 advantage. The Vikings rallied to take a 19-18 lead, fell behind 23-21 and tied it at 24 before the Monarchs prevailed.

"Because it's so early in the season, we're still figuring things out," Gibbs said. "With the new players still fitting in, we're going to get better."

The fifth set featured four lead changes and eight ties. An Amelia Vugrincic kill gave the Vikings a 12-10 edge but a couple of unforced errors allowed Mitty to inch ahead ,13-12. The final three points: A Gibbs kill, a service ace from sophomore Hillary Cheung and a Gibbs block.

"It was an exciting win for us," Gibbs said. "We lost to Mitty last year and were waiting to play them again. This tells us we're a strong team. Each year we've gone a little further in the state tournament. Maybe this is our year."

M-A (1-1) and the Knights are both entered in Saturday's Chris Chandler Invitational, hosted by Menlo School.

Sarah Strus added 15 kills and Helena Granger had 10 kills on .643 hitting for the Wildcats (4-4), who host Aragon in a PAL Bay Division opener at 6:15 p.m. next Thursday. Molly Buddie added 37 assists and Krista Opp had 22 digs.

Senior Isabella Yu earned medalist honors with a score of 41, leading a balanced round in Gunn's 217-241 victory over Monta Vista in a nonleague contest at Baylands Golf Links on Thursday.

Senior Rachel Hollett followed with a 42, Cynthia Dharmawan had a 43, sophomore Athina Chen came in with a 45 and sophomore Catherine Chu scored a 46. Sophomore Alanna Lee, the Titans top golfer in a match against Valley Christian earlier in the week, fired a 49.

Gunn opens SCVAL play with a match at Saratoga on Monday, September 16.

Singapore's oldest cafe was about to open in Palo Alto. Then, the coronavirus hit.
By Elena Kadvany | 2 comments | 7,244 views

A Pragmatic Approach to A Trillion Trees
By Sherry Listgarten | 4 comments | 4,352 views

Repairing a Disagreement with your Beloved & “Physical” vs. “Social” Distancing
By Chandrama Anderson | 2 comments | 3,050 views