Firefighters use 108-foot-long ladder to reach platform near U.S. Highway 101 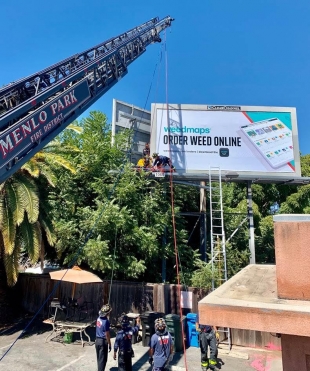 A 108-foot ladder was stretched out to a billboard near East Bayshore Road and Pulgas Avenue in East Palo Alto where a man wound up stuck on the sign's platform on Sept. 3. Photo courtesy Menlo Park Fire Protection District.

III is a registered user.


Make sure this clown pays the cost of saving him.
Not our taxes.
III


Was he trying to soil the billboard with grafitti?

Report Objectionable Content
Email Town Square Moderator
6 people like this
Posted by Member
a resident of Fairmeadow
on Sep 6, 2019 at 10:11 am