Some question why new group is needed 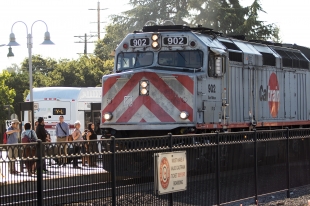 The Palo Alto City Council plans to consider on Sept. 9, 2019, the establishment of a Rail Blue Ribbon Committee to help reach a decision on grade separation. Photo by Veronica Weber.

13 people like this
Posted by Resident
a resident of Another Palo Alto neighborhood
on Sep 5, 2019 at 9:32 am

If the previous committee doesn't do what you want, get a new committee!

I feel a committee must consist of residents as well as those who understand traffic engineering, as well as engineers with experience in building train track systems through difficult topographical areas.

How about requiring that everyone wishing to serve on the committee pass a test to demonstrate they understand the important rail crossing issues?

We know what happens at the state and national level when major issues are decided by politicians with no clue what they're doing. Palo Alto's hardly immune from this: we have local officials who think we have no traffic problems, lower parking requirements when we have too little, and approve offices like candy. A competency test to get on the rail committee could eliminate people just angling for self-promotion and let those who actually understand the problems finally get something done.

Report Objectionable Content
Email Town Square Moderator
10 people like this
Posted by PhilB
a resident of St. Claire Gardens
on Sep 5, 2019 at 11:02 am

PhilB is a registered user.

The real issues are NOT JUST POLITICAL. Disclosure: I am serving on the Citizens Advisory Panel. The issues include cost (meaning tax increases), possible house takings via eminent domain, construction time and impacts, visual impacts, noise, traffic on local streets.

If you think the issues are just engineering, I invite you to come to the next XCAP meeting and see otherwise. Today, Thursday, at 4 pm, at City Hall. Ground floor level, community meeting room on the left side of the lobby.

Report Objectionable Content
Email Town Square Moderator
21 people like this
Posted by Resident
a resident of Community Center
on Sep 5, 2019 at 12:12 pm

Can somebody explain this for me?
I recall that in early 2017 the city council said there was such a rush to come to a decision on grade separations within a year that there was no time to set up a community advisory committee of any kind, otherwise we would lose our share of the Measure B dollars if we did not reach decisions by early 2018.
Then, last year the council and staff set up the CAP, but did not initially allow them to do anything other than advise on public outreach while still insisting that a decision had to be made by then end of 2018 or we would be over run by the increase in trains before the separations were built.
In spring of this year they expanded the CAP into an XCAP and gave them a bit more of a role to look at design alternatives, but they were not authorized to try to arrive at consensus or make recommendations. Also, that decisions on design would be completed by the council this October. Then the city manager proposed last month a RBRC, whether instead of the XCAP or in addition to it is not clear, and that the RBRC would be composed entirely of former council members. Now he is proposing a different composition to the RBRC, in addition expanding the role of the XCAP.
Meanwhile, the Finance Committee is exploring a business tax, in large part to fill much of the hole in the grade separation funding beyond Measure B dollars, but without council agreement on the uses of the tax or its amount.
In the meantime, Caltrain is deciding whether south Palo Alto needs to be able to accommodate passing tracks in the future and the VTA is sending confusing signals about how Measure B dollars will be spent.
So, on Monday there will be another herky-jerky, half baked process change because there is not enough time to do it right, but there seems to be plenty of time to do it over.

Report Objectionable Content
Email Town Square Moderator
1 person likes this
Posted by Morris
a resident of Old Palo Alto
on Sep 7, 2019 at 1:11 am

You can't have too many rail committees.

Does the city need yetanother rail committee comprised of amateurs and politicians with no background in engineering. people who don't know who owns the right of way (hint: it isn't the City of Palo Alto) or don't know where the northern city limit/county line is?

Grade sep in Palo Alto is a very complex matter involving water tables and creek crossings and shoofly tracks and potential property takings. I don't think the city will be well served by yet another committee of unqualified amateurs, each with their own agenda.

CGPA is a registered user.


A committee will just come up with something that will cost a hundred trillion dollars. This is why the committees never get anywhere. Instead of a committee, we need a number.

Only then will any progress be made, because until we reject the last two plans as unworkable, the committee will arrive at the conclusion that A) We MUST have a tunnel, gold plated, and B) the other nearby cities will no doubt line up to pay for it (those same cities that paid build their own berms) so the cost to Palo Alto will be free! And then we'll be right back where we started.

The reality is that an elevated berm is the only feasible alternative, but of course the people living nearby will fight tooth and nail to build a tunnel. You have to reroute rivers and water lines and sewers, the costs are unfathomable. And they'll NEVER be willing to pay for it. So if you don't get agreement on what people will pay for, it's just more of the same. The people living nearby will demand we spend trillions, the rest of the city just wants to cross the tracks.

One option is to do nothing. When/if the train actually comes to fruition then you would have time to observe and decide based on what issues arise.

How does Caltrain (PCJPB) feel about having its trains placed underground given the flooding risk? They own the rail infrastructure and will have to approve any scheme Palo Alto dreams up.

If a tunnel floods then the trains don't move, either northbound to the city or southbound to San Jose/Gilroy. Let's face it, CPA has a less than stellar record of keeping the Oregon undercrossing from flooding.

I've read where the city of Burlingame considered a trench/tunnel and concluded it would be too costly and impractical to keep the trench/tunnel dry rear around, so they nixed the idea. What makes CPA think its experience would be any different? You see, there is no natural drainage along the ROW through Palo Alto.

In addition, trench/tunnel construction would require building a shoofly track to circumnavigate the construction zone so you would have Caltrains hurtling up and ddown Alma day and night.

Ultimately all this talk of a trench/tunnel may be whistling Dixie. First sound out PCJPB to see if they would agree in principle to a trench/tunnel. If they say "no" then that settles that.