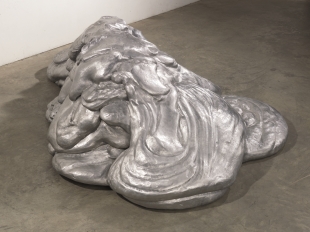 There has been a notable trend in the art world toward recognizing and reassessing the work of mature women artists. Judy Chicago, Yayoi Kusama, Betye Saar, Yoko Ono and Carmen Herrera are all enjoying well-deserved, if delayed, tributes in the form of solo exhibitions at major museums and galleries. Add to the list sculptor/painter Lynda Benglis, who is the featured artist at Pace Gallery in Palo Alto until Oct. 23. The show, her first with the New York-based enterprise, consists of 20 works from various points in her long and prolific career.

"Lynda Benglis's exhibition with Pace marks several firsts for her, not only her first show with the gallery but also her first solo exhibition in the Bay Area in over 15 years," CEO Marc Glimcher said.

Benglis was born in Louisiana in 1941 and earned her bachelor's degree at Newcomb College in 1964. Like many artists, she was drawn to the new center of the art world, New York City, where she encountered the largely male-dominated circle of artists working in the Minimalist and Process Art styles. Wanting to differentiate herself from the pack, Benglis began working in unusual materials, such as poured latex, that resulted in shapes that moved away from the wall and into the viewer's domain. These pieces (known as "pours") blurred the line between painting and sculpture, as did her work using molten beeswax applied to Masonite board. When asked about her unorthodox choice of materials and process for the book "High Times Hard Times: New York Painting 1967-75" Benglis explained, "I wasn't breaking away from painting but trying to redefine what it was."

The Pace exhibition begins with a more recent (2018) piece entitled Elephant: First Foot Forward. Installed directly on the floor, it is a gleaming circular swirl of bronze that might evoke visions of curling waves. A gallery guide explains that the piece was originally created in ceramic and is meant to "push the traditional scale of the medium and its material possibilities."

A step into the second gallery space reveals a totally different take on unusual materials. Bright, cheerful and coated with glitter, these works are formed using a skeleton of chicken wire covered with handmade paper. While all are attached to the wall, they curve and undulate away from it and can assume any meaning the viewer cares to ascribe. One of them clearly looked like a spinal column while others resembled colorful candy wrappers.

Pace Palo Alto President Elizabeth Sullivan said, "What I like about her work is that you can keep coming back to it and the more you come back, the more you see different things, which is a wonderful thing."

Sullivan explained that the artist had input as to the choice of works to be shown and how they would be installed. Benglis wanted the following quote to be placed on a wall: "I totally believe that art is an open dialogue and that it is not logical. It does not always make sense."

Visitors can keep that thought in mind as they enter the next gallery where Eat Meat, an early (1969) poured foam work (later cast in aluminum) is sited, again directly on the gallery floor. Reminiscent of volcanic lava that has been suddenly stopped and set in place, it might test the limits of "sense" but keep in mind that few women at that time had the moxie to work with industrial materials, and in such a bold way. Benglis is well-known for her work in promoting gender equality in the art world and, perhaps, notorious for a series of racy self-portraits she staged as advertisements and gallery announcements in the early 1970s.

Also installed in this space is one of her pleated metal sculptures that was inspired by the artist's favorite work of art, The Winged Victory of Samothrace. Finally, the show ends with one of her signature polyurethane pieces, Swinburne Figure I (2009). It is bright pink, highly textured and resembles the rugged terrain of a rocky landscape.

The exhibition offers those of us living on the West Coast the chance to become more familiar with this venerable artist's work. (The nearby Anderson Collection owns one of her beeswax pieces, Plum, but it is not currently on view).

And thanks to Pace Gallery's continued efforts to interface with Stanford University, there will also be an opportunity to see Benglis in person and hear her speak about her work. On Oct. 22, she will participate, along with writer and curator Kimberly Drew, in The Komal Shah and Gaurav Garg Artist Conversation Series. The event is free and open to the public.

Following her show at Pace, Benglis will be featured at the Museum of Cycladic Art (Athens) in November and, next May, she will have a major solo exhibition at the Nasher Sculpture Center in Dallas. While such accomplishments are noteworthy, Benglis hasn't really moved very far from her very first art works, which were made with strings and sticks. As she explained in an interview with the New York Times T Magazine, "An urge to make things has always been evident. Art is about tricks of illusion and space."

What: The work of Lynda Benglis.

A Pragmatic Approach to A Trillion Trees
By Sherry Listgarten | 4 comments | 4,083 views

Singapore's oldest cafe was about to open in Palo Alto. Then, the coronavirus hit.
By Elena Kadvany | 2 comments | 3,605 views

Repairing a Disagreement with your Beloved & “Physical” vs. “Social” Distancing
By Chandrama Anderson | 2 comments | 2,749 views

The University of California’s flexible policies during COVID-19
By John Raftrey and Lori McCormick | 6 comments | 2,677 views