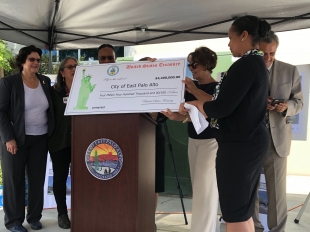 "Most people can't afford flood insurance, especially in lower-income communities such as East Palo Alto, but the stormwater project will make it possible for many homes and businesses to be removed from federal flood designation so they won't need the insurance, Eshoo said."


Most of the low incomes household owners sold out and move away chasing behind the low income million bucks. Let's be honest East Palo Alto is no longer home to majority low incomes households, otherwise the place would have been passed up for this 4.4 million. The icing is on the cake welcome to the new and improved EPA, we are building working spaces on top of a former toxic chemical waste plant. It all makes sense why the late Steve Job wife purchased property here, All is working as planned. Who's all benefitting from this surely not the low income people, the City is making away possible for 2020 Bay Road Project.

Flying: How much is enough? It's personal.
By Sherry Listgarten | 5 comments | 1,437 views