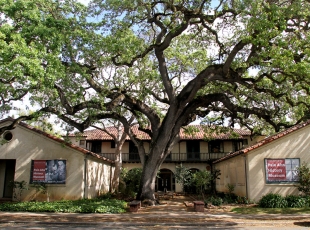 The Roth building at 300 Homer Avenue is the future site of the Palo Alto History Museum. File photo by Veronica Weber.

We’re very grateful that the county is willing to help preserve historic buildings that continue to serve the public.

This new grant, coupled with support from over 900 individuals, businesses, corporations, foundations and the city, drops our fundraising goal for construction to “only” $700k - completing the $9.2 million needed to convert the old Roth Building into a usable space.

Once that’s done, we can turn it into a museum. (Learn more at PaloAltoMuseum.org.)

Thank you to our community for their support over the years! - Laura Bajuk, ED

"Snags" ? is that millennial-speak?
Why the negative connotation?

^ Snag sounds like a fishing term to me.
Merriam-Webster: "to catch or obtain usually by quick action or good fortune"

Report Objectionable Content
Email Town Square Moderator
6 people like this
Posted by Holman on display
a resident of Adobe-Meadow
on Aug 31, 2019 at 6:27 pm

Report Objectionable Content
Email Town Square Moderator
14 people like this
Posted by Cultural Consultant
a resident of another community
on Sep 1, 2019 at 4:20 pm

CONGRATS to Palo Alto History Museum on receiving a Historical Heritage Grant from the County of Santa Clara.

I agree with another commenter on the use of the word "snag" in the headline. Perhaps "awarded" would have been a better choice of words. This grant process was very competitive, so Palo Alto History Museum should be commended for the hard work they put into their grant application. "Snag" doesn't cut it.

Report Objectionable Content
Email Town Square Moderator
10 people like this
Posted by Novelera
a resident of Midtown
on Sep 3, 2019 at 3:34 pm


Great news! I'm very pleased to see the History Museum moving closer to fully use that beautiful historic building. The Palo Alto Historical Society usually comes with some exhibits to the Midtown Residents Association Ice Cream Social. There's a lot of interesting things that they have and I look forward to visiting the new quarters when completed.

Report Objectionable Content
Email Town Square Moderator
7 people like this
Posted by Sally
a resident of Downtown North
on Sep 4, 2019 at 5:59 pm

So, this grant is a mere ONE PERCENT of the $9,100,000 price tag. I hate to be the negative Nancy, but there is no common sense on this project here. Given that context, this shouldn't even be a story.

A decade of failure later, who does this group think it is fooling? Anyone paying attention knows this project is a protracted boondoggle, but it's too "connected" for anyone to stick out their neck to speak out publicly. [Anyone who knows how to add numbers, anyway.] They're all just hoping it will slowly die. [It's core of exponents excepted, of course.]

I know I'll get called a "history hater" for saying this, but it's going to be a massive waste of public funds if it does go through, because there's no way they'll raise the money and council will get pressured by this vocal minority into paying the rest with your money. We other folks need to be ready to oppose this crazy price tag vehemently if/when it comes to that.

History, yes. Asking US to fund a $10 million dollar project with a decade of insufficient support... no way.

Report Objectionable Content
Email Town Square Moderator
2 people like this
Posted by Laura Bajuk
a resident of Charleston Gardens
on Sep 11, 2019 at 1:07 pm

Allow me to offer a few clarifications that should put some of you more at ease, should you be open to it.

- The Museum group (most all volunteer) has raised all but $750,000 of the needed rehabilitation amount – which is $9.2M. We’re working on the last eight (8) percent, and are proud to be so close to goal - at last.

- Why so much? Forget what you pay for a home remodel. All City projects (this is and always will be a City building) must pay prevailing wages – much higher than an individual pays privately. And the 1932 cast-concrete building needs seismic bracing. It adds up fast.

- The good news is that our rehabilitation contract holds steady at a not-to-exceed $9.2 M, a real plus given the current economy.

- On top of the above, the Museum group has already spent over $3 M to get to this point - on all the required prep, planning, architects, revisions, etc. including City permits (we don’t get a pass on City fees).

- Plus, we’ve raised 25% of the funds to turn it into a Museum once construction is done. When done, almost all the entire project funding will come from community members.

Yes, it's taken time to get to 92% of the needed funds for construction. Asking someone for a million dollars may sound easy to those who’ve never done it. Other issues will always compete for limited resources.

But Palo Altans get it done – in time. Whether it's a decade or so for the Woman's Club to fund raise for their building, or several bond efforts to revamp our libraries, determined community volunteers eventually get there.

Over 900 community members have stepped up to help - we’re grateful for everyone’s support. Thank you for a chance to share more of our story with you.

Thank you to all the people who are putting their time and effort into bringing this exciting project to Palo Alto.