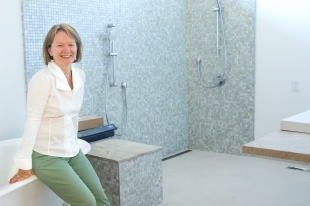 Olesia Chikunova stands in the bathroom she designed as wheelchair accessible for an aging parent, in Los Altos Hills on August 20, 2019. Chikunova is the founder of HomeWiP, a renovation consulting company. Photo by Veronica Weber.

Home renovation can be a difficult and arduous process, especially for those who are new and inexperienced. However, self-described "homemaking freak" Olesia Chikunova does not shy away from a challenge. She oversaw the remodeling of her first home in 1998 while preparing for the birth of her first child. She renovated a house for her in-laws while pregnant again. Two decades and several remodeling projects later, she has gone from a sales supervisor in Russia to a home renovating guru and CEO of her own home renovation company here in the Bay Area.

Chikunova, who is working on her eighth remodeling project, shares her expertise with renovation first-timers through a Meetup group she co-founded that now has over 100 members. The group meets monthly at various Midpeninsula locations. She also publishes articles on the website Medium detailing various aspects of the remodeling process. Her aim is to help homeowners make educated choices about renovating their homes.

Chikunova worked in marketing and corporate management, and originally viewed home remodeling as more of a "side hustle." But when she moved to the Bay Area five years ago, she turned her hobby into a new career. She began remodeling properties along with many of her friends, and by talking to them about their various projects, she made a realization.

"I started hearing all these horror stories that people tell each other about (their) remodels," she said. "Because I was doing this so often myself, I wasn't just listening to horror stories, I was trying to understand where they come from."

That's when she and a friend founded the "SV Homeowners' Club: Updates and Remodels" Meetup group, aiming to address some common problems people face when they renovate their homes.

There are many issues that she says "everybody understands but nobody talks about," including what she calls an inherent conflict of interest between homeowners and the contractors they hire.

"If you think about it, there is no motivation for the contractor to save you money," she said. "It's their business, so the more money they make off you, the better for them. It's up to the homeowner to be educated enough in construction to be able to figure out what makes sense and what doesn't."

As the leader of the Meetup group, Chikunova advises homeowners on renovation projects and organizes free seminars with industry professionals to educate members and answer questions. Seminars typically focus on a specific topic: One event this past spring focused on accessory dwelling units and featured three contractors who specialize in different types of construction, while another explored how to get started on a home improvement project. By having a good understanding of the home renovation process, homeowners can save money in the long run by preventing mistakes and avoiding unnecessary fees and charges, according to Chikunova.

Meetup group member Ann Lucero said that the advice she received has enabled her to begin several home renovation projects that she had been putting off. She's been a member of the Meetup for about a year.

"(The group) has been an excellent resource for me," Lucero said. "It's very helpful to have somebody who's done the projects before or is going through it with you, especially as a single woman, because I feel like I'm a target for bad contractors."

Group members also share advice and ideas, and support each other. Stewart Yusem, a member of the Meetup for about a year and a half, got help for his bathroom remodel project.

"Olesia has been very helpful. She's got good advice," he said "At some of the meetings you have to take turns, and you have to be patient, but it can be helpful to listen to other people and their approach, their problem and questions. ...They also have their input when it is your turn to talk about your project, they're listening and helping you."

Besides the logistics of wrangling with contractors, another common problem the group helps homeowners face, Chikunova said, is being unable to choose between all the options at their fingertips.

"At the current state of the market where there's so many choices around us, just selecting a faucet can be daunting, and people get overwhelmed," she said. She compares the process of narrowing down options to a funnel: Once you set a few restrictions, the pool quickly becomes much narrower.

"You start with all the faucets, and there's 1,700 at just one retail shop. And then you go, "I don't like gold or copper colors," and then suddenly your funnel has become five times smaller. Then you go, "I also need to be able to put my head under the faucet." Suddenly you're picking from 200."

In addition to the Meetup, Chikunova also offers home renovation help through her company, HomeWiP, which she describes as a "home renovation concierge service." The goal is to assist clients with time-consuming aspects of renovating, like finding a contractor.

"Contractors are super busy and just chasing them ... is a full-time job," she said. For those who are already working full-time, it can be much more difficult to find the time to devote to a remodel. Her company allows homeowners to focus on the aspects that matter to them, and delegate some of the more difficult tasks.

Chikunova said that although she doesn't have a favorite project she's worked on in the Bay Area, she just enjoys watching the transformations.

"I call homes that need taking care of 'Cinderellas,' because you look at them and you see what's possible," she said. "Then you just figure out how to make it possible within the budget and within the schedule."

The SV Homeowners' Club: Updates and Remodels Meetup meets the first Monday of the month, 6-7:30 p.m. at various Midpeninsula locations. The next meeting will be Sept. 17 at 496 First St., Los Altos. For more information, visit meetup.com/SV-Home-Remodeling-Meetup/.

A Pragmatic Approach to A Trillion Trees
By Sherry Listgarten | 4 comments | 4,084 views

Singapore's oldest cafe was about to open in Palo Alto. Then, the coronavirus hit.
By Elena Kadvany | 2 comments | 3,630 views

Repairing a Disagreement with your Beloved & “Physical” vs. “Social” Distancing
By Chandrama Anderson | 2 comments | 2,751 views

The University of California’s flexible policies during COVID-19
By John Raftrey and Lori McCormick | 6 comments | 2,677 views