Wildcats may not be tamed in second half of football season 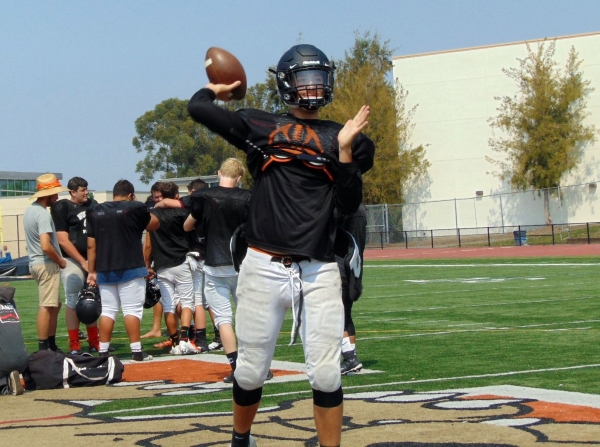 It’s been a struggle in recent years for the Woodside football program, which hasn’t had a winning season since 2008. But there’s a positive vibe on hand this fall as the Wildcats prepare to open the 2019 season.

“I’m feeling very positive, I think this can be a year we get over that hump we’ve run into the second half of the season,’’ Woodside coach Justin Andrews said.

Justin Andrews
You rarely see such an extreme contrast between a team’s first half record and second half record as what Woodside has gone through during Andrews’ tenure as coach. The team went 4-6 last year, 4-1 in the first half, 0-5 in the second. And that’s been typical. The last five years Woodside has been a combined 14-11 over the first five games of each season, a combined 2-23 over the final five games of each. Attrition has taken a bloody toll.

“Our depth is pretty good,’’ Andrews said. “I don’t think injuries will be as derailing as they’ve been in the past.’’

He has 45 players on the varsity roster compared to low 20s a year ago and high teens the year before that.

Brody Crowley (6-4, 190) returns at quarterback after only playing four games last season due to injury.

“He’s really eager to get back out there,’’ Andrews said. “He’s been looking real sharp.’’

Josh Peterson will be the primary tailback.

Tommy Williams, a team leader as a cornerback on defense, provides depth at running back.

David Silk, the team’s leading receiver last year as a sophomore, has transferred to Serra. But Andrews likes what he’s seen from Ethan Mooney, Deontae McKean and Kyle Knudson at wide receiver.

The offensive line, with four new starters, is the question mark. Will Polati, who started as a sophomore, will be looked upon to lead the unit.

Will Holthaus (6-5, 260), a lineman with college potential. is sidelined with a shoulder injury and might not play at all.

“Our secondary is looking solid, but experience is an issue on the defensive line with Holthaus out,’’ Andrews said.

With Carlmont having moved up from the PAL Lake Division to the Ocean, Andrews said he thought Capuchino and Jefferson were two of the favorites for the Lake title this season.

“Maybe throw us in that mix,’’ Andrews said. “We’ve been having real solid practices. On the whole, we're definitely heading in the right direction.’’

A Pragmatic Approach to A Trillion Trees
By Sherry Listgarten | 1 comment | 2,467 views

The University of California’s flexible policies during COVID-19
By John Raftrey and Lori McCormick | 6 comments | 1,904 views

Repairing a Disagreement with your Beloved & “Physical” vs. “Social” Distancing
By Chandrama Anderson | 0 comments | 1,264 views