Report: 'Vaping is popular' and will require novel public-health strategies 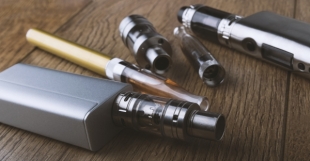 A variety of electronic cigarettes and vaporizers. Photo by Getty Images.

While cigarette use among high school students in Santa Clara County has hit an all-time low, vaping is on the rise: Almost one in three teens have tried electronic cigarettes, a survey released Wednesday has found.

The data comes as schools, health officials and parents in this region and across the country are working to combat what many describe as an explosion in teen vaping.

The California Student Tobacco Survey — the largest countywide survey of local youth tobacco use since the surge of electronic cigarettes' popularity — was administered last fall to assess teens' use and awareness of cigarettes and other products, including e-cigarettes, hookah and smokeless tobacco. About 6,700 eighth, 10th, and 12th grade students from 18 Santa Clara County schools took the survey this fall and winter.

More than 31% of high school students surveyed said that they have tried e-cigarettes. More than 13% said they currently use e-cigarettes, meaning they had vaped in the last month. This rate is lower than e-cigarette use in the county as a whole (27%) but slightly higher than the statewide rate (11%).

By comparison, only 1.4% of high schoolers said they currently smoke cigarettes. This is "cause for celebration," the survey report notes. "The low prevalence suggests that the social norm for cigarette smoking among teens has collapsed. Smoking is no longer a cool thing to do."

Vaping, on the other hand, is undeniably "popular."

"The novel devices and plethora of flavors that come with these new products are attractive to teens. Many have experimented with these devices, and many who have not are susceptible to trying them in the future," the report reads.

While learnings from the state's anti-smoking public health campaign can be applied to teen vaping, "new strategies may also be necessary given that the products and the industry itself continue to evolve," the report states.

County officials warned about the harmful health impacts of vaping for adolescents.

"E-cigarettes and other vape products contain many chemicals — some known to the consumer, and some not — and we don't fully know what the harms of these substances might be in the short and long term," Dr. Sara Cody, Santa Clara County health officer and director of the Public Health Department, said in a press release. "What we do know, however, is that e-cigarettes and other vape products containing nicotine are harmful to the developing brain, which includes the adolescent brain."

Despite the fact that Santa Clara County bans the sale of flavored tobacco products (except in adult-only stores), the majority of teens reported using flavored products, including cigarettes, vape and hookah.

Most high schoolers reported getting e-cigarettes from friends rather than buying them directly. The survey notes that a "high percentage" of students (24%) did not report how they buy e-cigarettes. In California, it is illegal for any store to sell any tobacco products, including e-cigarettes, to youth under the age of 21.

The survey found that e-cigarette use is highest among white teens and that there is no significant difference in rates between male and female students. Tobacco use was much lower among middle school students: Only 3.5% of eighth graders said they had used a tobacco product in the last month, but among those who had, e-cigarettes were the most prevalent.

To share data and develop solutions to the "youth vaping epidemic," the Santa Clara County Public Health Department, Santa Clara County Office of Education and First 5 Santa Clara County are holding an inaugural anti-vaping summit on Friday, Sept. 13. The event will feature panel discussions, expert presentations and a keynote address by April Roeseler, the chief of the California Tobacco Control Program. To RSVP, go to eventbrite.com.

There are a number of events being co-sponsored by the Santa Clara County Office of Education on Tobacco Use Prevention Education:


From what I hear, Paly administration sponsors daily vaping events in all of the campus bathrooms open to all students that are widely supported by the students.

Jonathan Brown is a registered user.


It doesn't help that the City encourages kids to take a "Safe Route to School" that includes a long stoplight at the Smokes & Vapes shop on the corner of Matadero and El Camino. Even San Francisco takes a tougher stand, having banned e-cigarettes. The City Council and school district ought to take this issue seriously.

Vaping while not for everyone, is a healthier alternative to conventional smoking.
No tar or harsh smoke...just the pure nicotine or THC.

The first few seconds after awakening; before I remember the virus
By Chandrama Anderson | 0 comments | 3,045 views

Can you stay healthy without making more trash?
By Sherry Listgarten | 4 comments | 2,435 views

Think about helping others in our coronavirus-affected area
By Diana Diamond | 5 comments | 2,268 views