Shakespeare in the Park in residence in Redwood City through Sunday 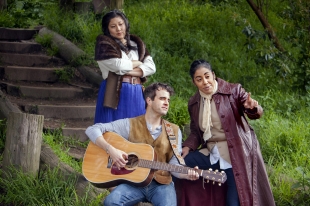 (Left to right) Anne Yumi Kobori as Celia, Michael Barrett Austin as Orlando and Regina Morones as Rosalind in San Francisco Shakespeare Festival's 2019 Free Shakespeare in the Park production of "As You Like It." Photo by John Western.