Around Town: Auditor's office getting taste of its own medicine; Bay Trail work set to begin | News | Palo Alto Online |

Around Town: Auditor's office getting taste of its own medicine; Bay Trail work set to begin

Also, Santa Clara County gets green light for new voting system to be used in 2020 elections 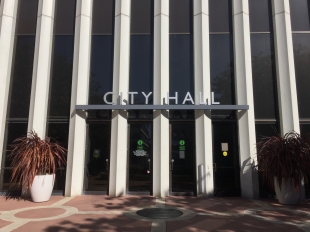 The Palo Alto City Auditor's Office is set to undergo an "organizational review" to evaluate whether some of the functions of the office should be placed under the purview of the city manager. Photo by Jamey Padojino.

The story about our independent Auditor's Office is of crucial importance.

The plan afoot (hopefully dead by now) was to eliminate the auditor's office and replace it with an outside consultant reporting to the City Manager. It was only did Palo Altoans notice and voiced their outrage, but our City Charter pretty clearly demands a full auditor AND expressly prohibits intermingling with City Manager functions. Someone in City Hall might have finally read the City Charter by now....

The Backstory: The office has been ineffective lately, and bureaucrats avoid difficult clean-up work. Add to that the ever-present concern about pension costs, and elimination seems attractive. The contractor we've hired in the interim will do what all contracted consultants do... give gravitas to what the client already wanted to hear... that summarizes why we need an independent auditor's office. The charter lays out that we are also entitled to one.

The Solution: City Council needs to do its job. The City Auditor reports directly to them. Blame for poor performance rolls up ultimately to them. If Council Members aren't up for that, they are simply saying they are incapable of executing their job responsibilities.

City Council - please comply with the voters' request and the city charter's requirements: appoint an independent auditor asap, and fully fund and staff the office.

This story and the council and city's contemplated actions bring disrepute to all. City Council, please meet your obligations to your taxpaying constituents to appoint a city auditor.

The city's budget is approaching $1 billion and the city's unfunded employee pension liabilities are reportedly $900 million. An auditor is needed.

Report Objectionable Content
Email Town Square Moderator
5 people like this
Posted by Art
a resident of Barron Park
on Aug 20, 2019 at 2:30 pm

Art is a registered user.


Shame (double shame) on whoever is suggesting that "some of the functions of the office should be placed under the purview of the city manager, a move that could effectively eliminate its independence." The independence of the auditor is sacrosanct; that's why the office was structured this way in our City's Charter. The independence of the auditor from overview by other City Departments and other City employees is absolutely CRITICAL to its operation and explains its usefulness. For example, some have made criticisms of the recent Code Enforcement audit, that it was too honest, too searing in its conclusions, too clear in the shortcomings of staff and of staffing. It indicated what Council needed to do to remedy the problems and Council enthusiastically embraced the audit. Had the audit been done under the authority of the City Manager, it would have been pigeonholed and not have seen the light of day.

Report Objectionable Content
Email Town Square Moderator
2 people like this
Posted by Resident
a resident of another community
on Aug 20, 2019 at 8:16 pm

I agree that we need an independent audit function. The recent audits all pointed out important issues, and I think they have been much easier to read than the audits that were done years ago. Based on the previous council comments that suggested eliminating the staff, it seemed that productivity was an issue, and comments made in previous articles suggested that the staff were very resistant to the previous city auditor's attempts to make them more productive. Perhaps a revamping of the auditor's office is necessary, but contracting out the function isn't the answer, and putting it under the city manager is definitely not the answer. If staff are a problem, get rid of them, even if you have to pay them to leave, and hire people who are willing to do the job.

Report Objectionable Content
Email Town Square Moderator
2 people like this
Posted by TheLookingGlass
a resident of Another Palo Alto neighborhood
on Aug 21, 2019 at 4:41 pm

To "Resident": The problem was not the audit staff - the problem was Richardson. By all accounts, she was a terrible manager, whose ideas of "increasing productivity" actually did the opposite. God help BART (her new employer). I am not a member of the audit staff, but the situation is pretty well-known to insiders (both at City Hall and in the general professional auditor community.)