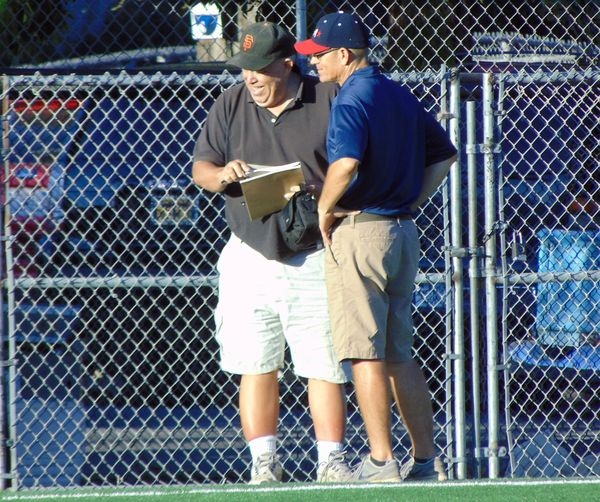 This was not an easy story to write.

My friend and colleague Rick Chandler died on Saturday at the age of 64 as the result of a stroke.

I first met Rick when we both worked at the Peninsula Times Tribune in the 1980s. The Times Tribune’s offices were on Lytton Ave. in Palo Alto. The paper originated after the merger of two local dailies, the Palo Alto Times and Redwood City Tribune. Rick, a Sequoia High School graduate, started at the Redwood City paper. The Times Tribune era came to an end in March of 1993 when the parent Chicago Tribune company folded the paper.

Later when I was sports editor of the San Mateo County Times I hired Rick. He worked with me there from 2002-2005, when his online gigs became too demanding of his time.

That was another dimension of Rick’s. In addition to covering local sports on the Peninsula, Rick had a national following online. His forte was an incredible sense of humor. When he told me, apologetically, that he was going to have to step down from his position at the County Times, it was to create a sports humor blog at Mad Magazine. (What, me worry?) That ended up not happening, but instead he became a feature humorist for a startup by the name of Deadspin that went on to attain a considerable amount of success.

In more recent years he split his time between Lake Tahoe and here on the Peninsula, where he was the primary caregiver for his elderly mother. We were always happy when he was around and available to help out with our coverage. On occasion he came up with some real gems, memorable stories such as this one when he stayed after a Palo Alto-Cupertino football game to talk to Palo Alto running back Aiden Chang in depth.

In addition to his writing, Rick also coached basketball locally -- at Serra in the 1990s (Tom Brady was a sub on a freshman team he coached there) and at Jane Lathrop Stanford Middle School in the early 2000s.

“Kids really responded to Rick,’’ said Mike Ferolino, the former athletic director and longtime P.E. teacher at JLS. “He had a great amount of knowledge of basketball.’’

Rick was also an assistant to Al Klein in 2006 and 2007 during a highly successful period at Woodside Priory (51-11 over two years).

We will miss Rick. I will remember him most for his brilliant and wicked sense of humor. He was the funniest person I’ve ever known.

Not a bad epitaph: “He made people laugh.”

RIP Coach Rick. He was a great coach for my son's middle school teams and a fantastic sportswriter!

You captured Rick very well, Glenn. He did great things up here in Tahoe.

A Pragmatic Approach to A Trillion Trees
By Sherry Listgarten | 1 comment | 3,060 views

Repairing a Disagreement with your Beloved & “Physical” vs. “Social” Distancing
By Chandrama Anderson | 1 comment | 1,794 views