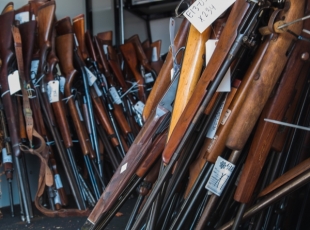 Some 355 weapons collected from a gun buyback event in East Palo Alto in 2013. Four Midpeninsula mayors are among the 249 who have signed an Aug. 8 letter calling for action on gun violence legislation. Weekly file photo.