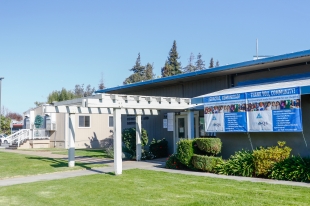 The Ravenswood City School District Board of Education will take action on the creation of a citizen advisory committee to re-examine campus names throughout the district at its Aug. 22 meeting. File photo by Veronica Weber.

This did not “go by the wayside with new leadership” this topic was brought up by Ruben Abrica and then Ana jumped on board. Ruben brought this to the boards attention - he should get credit for raising the issue.

What no one will say publicly is that they got yelled at by Gloria in front of rooms full of people whenever anyone brought up naming the middle school.

That is why the name was chosen. Gloria picked it.

it’s pretty clear that school will be named Chavez. The only issue is if it’s done by committee (per board policy) or by directive like in Gloria’s days.

African-American namesakes should have first priority in East palo Alto. Cesar Chavez has nothing to do with the history of EPA. Renaming Army Street in SF was OK because of the predominant Hispanic community...even though SF was not an agricultural region.

And to keep things in perspective...the law school at UC Davis should not have been named after Martin Luther King as there is no record of him ever setting foot in the college town. UCD probably should have named their law school after some white farmer or educator with a relative sense of history to the area.

BTW...I am African-American & a keeper of realistic perspectives.

Cesar Chavez was a civil rights figure in California. Therefore is relevant in the state regardless of city. A lot of schools/cities throughout the state including big cities in Southern California and the Bay Area learn/honor him and his movement. Why do people think East Palo Alto should be different? No figure in American or world history ever participated in any movement in East Palo Alto yet we learn & honor them. why is this different?

Report Objectionable Content
Email Town Square Moderator
8 people like this
Posted by Cesar Chavez Is A Fading Icon
a resident of Community Center
on Aug 11, 2019 at 11:56 am

With the increase in imported fruit from Mexico & Asia + southern hemisphere 'summer crops', the Central Valley agricultural movement of Cesar Chavez has lost its steam.

Someday his activism will be reduced to a mere historical footnote when AI-assisted indoor agriculture, further advanced automated harvesting techniques + the aforementioned imports eventually account for 80+% of our fruits & vegetables.

The East Asian and South Asian populations of EPA will soon become the majority. The school should be named after Ghandi or Confucius, to appropriately reflect the history of the new dominant races.

Report Objectionable Content
Email Town Square Moderator
7 people like this
Posted by The Name Game
a resident of Duveneck/St. Francis
on Aug 11, 2019 at 5:35 pm

Perhaps the best solution is not to name these schools, parks & public buildings after anyone. That way no one will feel offended or left out.

There are countless schools across America named after Kennedy or MLK. Do we really need another one?

As far as Cesar Chavez goes, his naming rights are probably best reserved & appreciated in the Central Valley.

Educators, local politicians & residents could be making better use of their & energy actually improving the school district rather than debating over namesakes.

Report Objectionable Content
Email Town Square Moderator
3 people like this
Posted by The Name Game
a resident of Duveneck/St. Francis
on Aug 11, 2019 at 5:37 pm