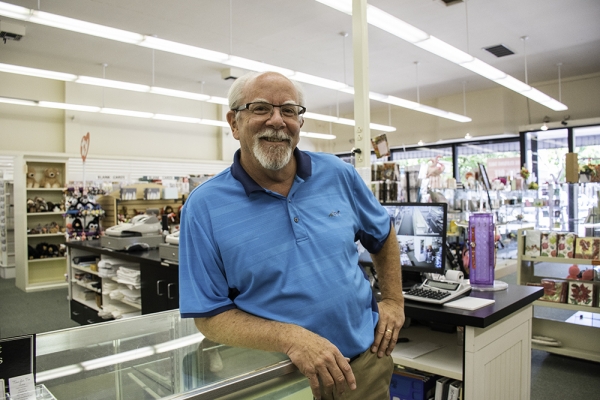 Kerry Hoctor, owner of Village Stationers, poses in his Menlo Park store on Aug. 1. The business will close its doors on Aug. 17. Photo by Sadie Stinson/The Almanac.

Elisabeth Westermann writes for The Almanac, the sister publication of PaloAltoOnline.com.

Sadly their neighbor Oriental Carpet is also going out of business. We were chatting with the owner and he said he just couldn't justify paying the new rents the landlord's demanding.

Guess how much the landlords want in monthly rents for the Oriental Carpet and Village Stationers; $25,000 and $20,000 respectively.

With the Congdon & Crome closure a few years back...an end of an era.

The same can be said of Keeble & Schucat (photography) & the music stores that once flourished in Palo Alto (i.e. Draper's, Dana Morgan & Son, Swain's House of Music, Guitars Unlimited-formerly of Menlo Park).

There used to be a lot of REAL sporting goods stores in the area as well...Spiro's (Town & Country), Stanford Sport Shop/ECR, Smith's (on the University Avenue 'circle' & PA Toy & Sports < I think they might still be around.

The high-end stereo stores have also vanished in the mid-peninsula as well except for the one on Moffett Boulevard in Mountain View.

Internet commerce & the digital mentality have succeeded in creating a TACKY & shallow local world...seemingly one more consumed (no pun intended) in dining at various upscale and fusion-styled restaurants.

Report Objectionable Content
Email Town Square Moderator
4 people like this
Posted by Max Hauser
a resident of Mountain View
on Aug 8, 2019 at 12:41 pm


The closure is symbolic, change-of-era. Trends that started long before e-commerce did. Survival of Village Stationers even THIS long is remarkable, unusual.

Within memory of most people living, every local business district in the Bay Area had its neighborhood stationery store -- sometimes two or three (if many offices or schools were nearby). One was here in MV on Castro Street. Most gave way in the '90s to stationery chains (larger but less accommodating -- McWhorters, around here), and those in turn to the big-box "Office" chains.

These shops went the way of the neighborhood pharmacies with soda fountains (once ubiquitous), and the little appliance-repair shops (still around but relegated to lower-rent strip malls).

Report Objectionable Content
Email Town Square Moderator
2 people like this
Posted by Resident
a resident of Another Palo Alto neighborhood
on Aug 8, 2019 at 12:49 pm

What we are getting around here in shopping options is becoming a chicken and egg situation.

Report Objectionable Content
Email Town Square Moderator
6 people like this
Posted by Greed kills communities.
a resident of Another Palo Alto neighborhood
on Aug 8, 2019 at 1:52 pm

Self-centered greed destroys communities. Family businesses all over the country are being destroyed to line Jeff Bezos' pockets. In the long run, is this a good way to build community? If you worry about inequity of wealth, make sure you aren't exacerbating the problem with your purchasing decisions. Amazon is NOT our friend. They are holding off raising prices until we are completely dependent on them.

Greedy landholders (many of whom are long-time owners who are tax protected by Prop 13) can charge higher rents and it's all profit. Make sure we ZONE for retail only where we want it--NO offices in retail areas. If retailers don't have to compete with higher margin office and housing uses, that will help to stabilize retail rents a little.


Report Objectionable Content
Email Town Square Moderator
11 people like this
Posted by parent
a resident of Old Palo Alto
on Aug 8, 2019 at 2:17 pm

I don't blame Amazon for this one. The big box stores (Staples, etc) took the school supply market away from neighborhood stationary stores years before Amazon became popular. The stationary market started dying when email became popular, then social media killed whatever was left. Stationary stores really need to adapt to the times and join forces with copy/print shops, package shipping/receiving services, photo labs, and other service industries that are rapidly changing in the internet era.

Report Objectionable Content
Email Town Square Moderator
6 people like this
Posted by pearl
a resident of another community
on Aug 8, 2019 at 3:15 pm

pearl is a registered user.


Thanks to you and your family, Kerry, for your many years of dedicated service with a smile to the community. You will be greatly missed. Enjoy your well-deserved retirement years!

Report Objectionable Content
Email Town Square Moderator
6 people like this
Posted by You will be missed
a resident of Green Acres
on Aug 8, 2019 at 7:38 pm

I think there is a bigger issue here. We are losing these local retail gems -- which Amazon really cannot replace, let's face it, it's mostly abysmal to shop for small stationery items online -- because of skyrocketing real estate costs. Online is incredibly wasteful with all the packaging and individual delivery. I'm not saying no to online shopping, I'm saying ONLY online shopping ends up being bad in so many ways.

While we can lament the various reasons the costs go up here, and things do fluctuate some, the Bay Area has been horridly expensive for all the decades I have lived here, and the specific details make it impossible for new business owners. What allows people to stay, the business owners, the teachers, the car mechanics, everyone, is buying (always, always, always at great painful sacrifice) and stabilizing costs that way.

If cities like Palo Alto and Los Altos want to maintain a reasonable civic life for residents including resident-serving retail, they must find a way to buy up the retail areas and own at least the land under the buildings, with some constraints on the use and sale so the costs stabilize, the way Stanford does to keep nice relatively affordable neighborhoods for their faculty that you could only find in the Midwest. There is no way to maintain resident-serving local retail in the long run unless we do this.

It's really doable, when you consider that Midtown Shopping Center was sold not that long ago for $15 million, not during the recession. Cities can also finance things with bonds and longterm loans. The other benefit is that when shop owners benefit, the City can also leverage higher wages for the traditionally low wage workers, meaning the restaurants can stabilize their workforces, and workers will be better able to live here. If the City stabilizes costs by owning the land in retail areas (like Stanford does), the benefit grows every year while the costs remain stable.

Goodness knows we have billionaires who could make this happen for the communities they have so negatively impacted, but if it was going to happen, it already would have (speaking for Palo Alto, Los Altos billionaires have been instrumental in keeping it a village instead of pillaged).

Really sorry to see Village Stationers go. There are just so many things that help my life that I cannot easily (or at all) shop for online. All the best in your retirement!!


Report Objectionable Content
Email Town Square Moderator
4 people like this
Posted by Ideas
a resident of Midtown
on Aug 8, 2019 at 9:25 pm

This would be a great location for a tiki bar.

Thank you and best wishes for your retirement!

Report Objectionable Content
Email Town Square Moderator
1 person likes this
Posted by HRM
a resident of Ventura
on Aug 9, 2019 at 5:47 am

People love to blame Amazon for every retail closure but rarely consider the greed over high rents in the area. I would rather shop locally but high rents have forced closure on many stores and made way for exercise places. Just how many of those gyms do we need, we live in California with great weather to exercise outdoors.

"Stationary stores really need to adapt to the times and join forces with copy/print shops, package shipping/receiving services, photo labs, and other service industries that are rapidly changing in the internet era."

It's a losing battle, especially in the Bay Area.