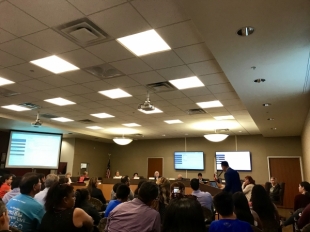 KIPP Bay Area Schools Assistant Principal Joel Portillo, right at podium, addresses the Sequoia Union High School District board of trustees on Aug. 7. Portillo would be principal of KIPP's proposed Peninsula high school, if approved by the board. Photo by Elena Kadvany.

Rueben Abrica - I know you are a community activist. Please do some digging about KIPP Valiant. I know your reputation in the community is a good one. You wouldn’t want to be associated with a school that drags young children around by their arms, screams at kids and has kids constantly running out of class being chased by adults. That school is all promises. I would never allow my child to be treated like that.

Also, why is the KIPP spokesperson the same person that was at The Primary School for less than a year? Another school that people should actually visit instead of assuming it’s perfect. Great resources for parents but their staff turnover is insane and their “teachers” are well intentioned but not trained AT ALL and all just out of school themselves.

Charters are like inviting gentrification in to your community at an even quicker rate.

Invest in your LOCAL schools.

As a parent of two KIPPers, I have NEVER seen anything like this, My children and I love our school, KIPP teachers are experience and treat students and parents with love and respect, and this is spread out to everyone in the community. Our experience at KIPP has been nothing but positive.