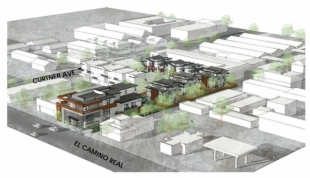 The Palo Alto City Council approved on Aug. 5 the final map for a mixed-use development with 17 condominiums at 3877 El Camino Real, the former site of Compadres restaurant. Rendering by Environmental Innovations in Design.

8 people like this
Posted by Universal Design
a resident of Another Palo Alto neighborhood
on Aug 6, 2019 at 8:05 pm

"the project will "transform this blighted parcel into a vibrant and sustainable mixed-use community." "

As long as it's not just a new blighted project like the chimney homes at Alma Plaza (seriously someone in a wheelchair needs to sue the City Council for allowing only homes that people with mobility problems could never even visit).

3 people like this
Posted by Anon
a resident of Another Palo Alto neighborhood
on Aug 7, 2019 at 8:23 am

So far, I haven't seen any description of the commercial space and whether it will easily be used as just another programmer's sweatshop, like some others that I have seen. How many square feet can be used for programmers, and, will there be more dwelling units than cubes?