Nonprofit looks to double fundraising by 2025 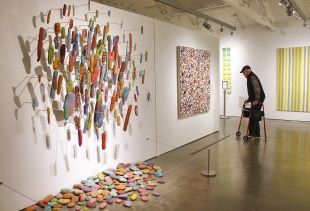 A visitor views the Palo Alto Art Center's exhibit "Spectral Hues" in January 2017. The center's foundation recently adopted a strategic plan that aims to double its annual revenues to $1.4 million by 2025. Photo by Veronica Weber.

Did anyone proofread this article?
Writer, I suggest you take another pass through.

Is there ANY organization, city run or otherwise, that's NOT looking for more funding and engagement? So where's the meat of the article? The stated goals and plans presented here are totally non-concrete. Vague partnerships with non-profits outside the city, getting folks to come more and give more, and "participat(ing) in community conversations"... oh, plus council members saying that good things are good. It wouldn't be a Weekly article about how City Hall spends money without that.

So, if there was real substance in the Strategic Plan, it's missing in this story. Or the article should be that an expensive planning process resulted in a super vague and rhetorical report. Where's the cost per kid of camps, classes, senior programs? Where's the "sell" that with d dollars more (from taxes or donors) you could serve n kids more, with evidence you can deliver?

If that's all in the report, read it and summarize it. Or at least leave a link. :)

Sally couldn't have said it better - if this is the story the plan seems very weak and vague.

The Art Center is a fantastic resource, the scale is perfect for retaining a community feel.
Unless you have a strong validated plan w/ concrete realistic goals why mess with it?

Many unique aspects of Palo Alto have been lost when groups want to further engagement.
Maybe it should be "enhance engagement"

Report Objectionable Content
Email Town Square Moderator
6 people like this
Posted by Old Palo,Alto
a resident of Professorville
on Aug 6, 2019 at 9:15 pm

Old Palo,Alto is a registered user.


How about an ordinance that all public art purchased for buildings in Palo,Alto,with public funds must be purchased from art center, or current residents of Palo,Alto?

Report Objectionable Content
Email Town Square Moderator
2 people like this
Posted by Kate
a resident of Duveneck/St. Francis
on Aug 7, 2019 at 12:35 am

I read the strategic framework on the foundation website. Here's the link for those of you who are interested.