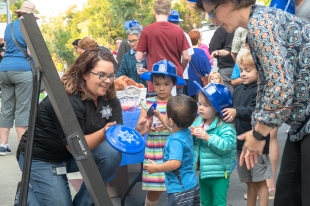 Palo Alto Police records specialist Paula Silva hands out prizes to Miles Eng as his sister, Sydney Eng, and mother, Kate Eng, look on during National Night Out outside the Palo Alto police station on Aug. 7, 2018. Photo by Adam Pardee.

Very important to get the police on your side in the fight against White Supremacy.

I don't understand why none of the Palo Alto neighborhoods are listed in the article. Ventura is hosting an event at the Ventura Community Center Playground from 7 to 9 pm. Free bubble wands for the kids and lots of others games.