Create a safe, comfortable home for the years to come 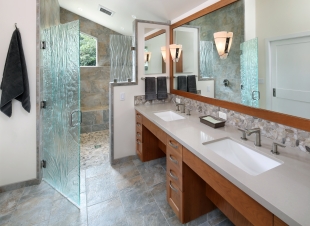 A roll-under vanity and curbless shower to provide better accessibility in this remodeled bathroom. Photo by Bernard Andre Photography, courtesy of Harrell Remodeling.

Stay in your home or move to a senior living community?

Most Americans age 50 and older "say they prefer to remain in their current residence," according to a 2018 AARP survey of adults age 18-plus.

One way to make that happen is through universal design, designing homes to be more accessible to older adults and people with disabilities.

"The idea of universal design and accessibility is essentially about being free, to have use of things that we need, in a safe and easy way. If that is provided and built in, it makes aging and transitioning (maybe with a caregiver) a choice," Palo Alto architect Jon Stoumen said.

Low-hanging fruit is as simple as installing grab bars and a hand-held showerhead in a bathroom or removing one chair from the living room to make room for a wheelchair user.

"If you're buying new furniture, you'll want one chair to be easy to move," she said.

As people age, eyesight dims, "so controllable light to increase brightness when needed is a must for the aging eye," she said.

Rather than disturbing a client by painting the entire living room, Krag suggested just painting the ceiling white and adding four floor lamps that cast light up.

"It was a quick fix. It took the painters about a day," Krag said, adding that she'd already shopped for the light fixtures.

When doing an update or remodel, people don't necessarily think about aging in place. But, Nowicki said, "It doesn't add a significant (cost) to include elements that make the space safer and more accessible. ... It could be as simple as using levers instead of doorknobs, taking away obstacles that create trip-and-fall hazards, such as area rugs, clutter, too much furniture so there's no clear path through a room.

"Most of these things you do for accessibility have the effect of just making the house more comfortable," and most are completely invisible when they're done, Nowicki added.

Occasionally, a client will be resistant to change. An athlete, for example, did not want to acknowledge his need of grab bars or a stair lift. So Krag suggested putting in the infrastructure—that is, a block behind the wall that could support a grab bar in future.

Two things are most important in remodeling a bathroom, Nowicki said, beginning with installing a toilet with an 18-inch seat height. Next is making the shower accessible, often with a low curb. "The ultimate is curbless or walk-in/roll-in, which is more expensive because you have to waterproof the entire floor of the room," she said.

Another option is adding a wall-hung toilet (which doesn't impact the waterproofing in the floor) that can be installed at any height. "An added benefit is giving a few inches more space in the room," she said.

And, for wheelchair access, you can install a roll-under sink. "It looks like a modern glass wall-mounted sink or regular countertop suspended from the wall, with drawers on either side," she added.

She suggests widening a doorway to 36 inches, or a minimum of 34 inches, to accommodate a wheelchair. If that's not possible, "you can put special swing-away hinges on it," she said.

Making a kitchen more accessible without remodeling is a tad more challenging, but not impossible. Roll-out cabinets can be installed, appliances can be changed or relocated, for example, placing a microwave on the counter.

Both microwaves and dishwashers have drawer models that are installed below the counter.

People with back issues, in addition to those in wheelchairs, can "appreciate something that's more comfortable and safer," she said.

Kitchen aisles should be at least 48 inches wide, with 60 inches required to allow a wheelchair to turn around, she said. "Standard height for kitchen counter is 36 inches; preferred for wheelchairs is 33-34 inches. That requires some careful planning: Kitchen appliances are not necessarily designed for that height," she said.

Some storage can be brought down to counter level, with dishes stored in a drawer rather than a wall cabinet. Nowicki mentioned a short client who moved everything she needed to the lowest shelves and simply gave away what was left—she couldn't reach them anyway.

Stoumen had a Southgate client in her 70s who asked him to come up with alternatives to either retrofit her home or tear it down. She ultimately chose starting all over, but still wanted a two-story house. Although she was resistant at first, Stoumen "advocated for doing an elevator. ... She didn't use it for a few years, but now she's so happy she has it. It gives her the ability to have freedom."

"Elevators come in a variety of sizes that don't require a mechanical room. All mechanics are contained in the elevator shaft with a small mechanical box outside," Nowicki said, noting that they can be integrated so the door to the elevator looks like all the other doors in the house. They can be as small as 4-feet square.

"Putting in an elevator is construction, it's an investment. When I've done it for people, they've weighed against moving to Vi (a local continuing care retirement community)," she said.

Other options include a chairlift that can fold up. These require landing space at bottom and top to get on and off. "You don't want to stop it over a step and have a dangerous balancing situation to get on and off. ... It's not great for people who have balancing issues," she said.

With Palo Alto's senior population expected to grow from 22,946 in 2010 to 34,351 by 2040, according to a report by the Age Friendly Community Initiative, more people choosing to stay in their homes will need to seriously consider universal design accommodations.

"It's common sense," Krag said. "When you talk about aging in place, it's just looking at all those things. It doesn't have to be a major remodel."

Freelance writer Carol Blitzer can be emailed at carolgblitzer@gmail.com.

The first few seconds after awakening; before I remember the virus
By Chandrama Anderson | 0 comments | 2,219 views

Can you Stay Healthy without Making More Trash?
By Sherry Listgarten | 3 comments | 1,543 views

Think about helping others in our coronavirus-affected area
By Diana Diamond | 2 comments | 1,091 views