It all started with a cookbook called 'Food in Jars.' 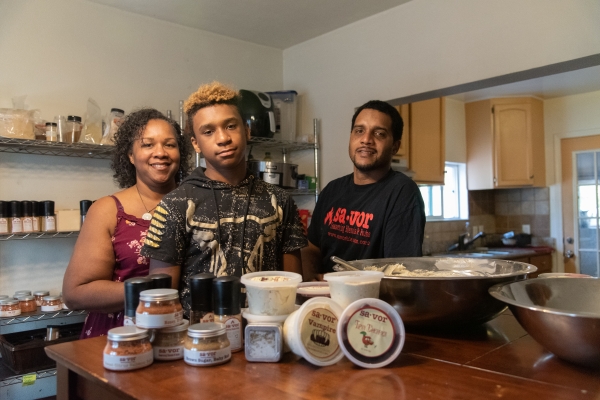 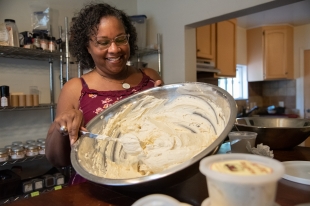 Lisa Spencer prepares a batch of "vampire butter" by mixing in garlic and herbs, which she sells through her family's business, Savor Seasoning Blends. Photo by Sinead Chang.

Vampire Salt, Brown Sugar Baby, Honey it's BBQ and You Jerk! are just several of the quirky, fun names the Spencer family plasters on little containers filled with their homemade spice blends.

For the past four years, East Palo Alto residents Dulani and Lisa Spencer and their son Myles have been running Savor Seasoning Blends, which specializes in salts, rubs and other seasonings.

"All of our products have really ridiculous names but people love it," Lisa Spencer said. "For instance, the garlic salt is called 'vampire salt' because vampires are known to be afraid of garlic. I call myself the chief creative officer. My son does a lot of the packaging and my husband does some of the making of blends."

It all started with a cookbook called "Food in Jars," which Lisa gave to her husband as a Christmas present several years ago. Soon after, he made his own rosemary salt; tasting it inspired her to make her own garlic salt. She started to create more unique blends in her home kitchen, giving them away to friends and family.

"During that first month, that damn book turned our tiny kitchen into a crazy mess of salts, bowls and pans," she said. "I had no recipe and I cannot follow recipes because I always end up putting too much or too little. Every once in a while, when we sold a jar, it was the most exciting thing. We probably sold four jars in 2015. The friends who we sold stuff to would come back for more, but nobody else really knew about it."

That changed in December 2016, when she sold her blends at a craft festival at the Peninsula School in Menlo Park. So many people loved it, she said, that she came back the following year.

They now sell their creations online — there are 17 different flavors, from rosemary salt to Jamaican jerk seasoning — and at The Market at Edgewood in Palo Alto and Delucchi's Market in Redwood City.

For the past two years, Lisa has also been attending local pop-up shops. It was at one of these events at the Tulip Jones Women's Clubhouse in East Palo Alto in February where she invented what she calls "vampire butter," which caused Savor Seasoning Blends to gain popularity.

"I decided to take the vampire salt, stir it up with some butter and put it on sourdough bread," she said. "One hundred people came through and asked where the butter was. I told them I sold the salt but I just mixed it with the butter to enhance the flavor. One of my friends yelled and said, 'Just make the damn butter.' People lost their mind; they kept talking about the vampire butter and posting it on Facebook."

Afterward, Lisa said, people would knock on her door and ask for a container of vampire butter. By the end of February, she had sold 300 containers. She also adds garlic, sea salt, parsley and basil to the butter.

She emphasized that she does not follow any recipes and instead relies on experimentation and intuition to "throw something together."

"My mom is from the South and most people who are from the South do not follow recipes well because we were never taught by recipe," Lisa said. "My mom had a cookbook and every once in a while she looked at something that looked good but she never followed the recipe. We call it 'just throwing something together.' What I will write down is what I put in it."

She has no aspirations for Savor Seasoning Blends to be sold in bigger grocery stores such as Whole Foods Market or Trader Joe's; instead, she hopes to get the blends into smaller, more boutique stores. In the future, her goal is to perfect the recipes and sell them to a corporation.

Her favorite part of the experience has been coming up with new blends with her family.

"I love creativity and Savor Seasoning Blends satisfies that," she said. "Seeing what I am able to make from scratch is always really exciting."

More information can be found online at savorblends.com.

I absolutely LOVE Savor Seasoning Blends!! I have pretty much tried every one of their products. But, I must confess I am addicted to that Vampire Butter!!!! I literally put it on EVERYTHING!!! Not only am I addicted, but my co-workers and family are as well. Savor Seasonings are well made and professionally packaged for freshness. Believe me, you will not be disappointed with any of these products. Thanks Spencer Family for your creativity, great seasoning AND BUTTER!

Lisa, Miles & Dulani, alrighty then! Is there nothing you touch that doesn't come up sensational? Between your famous Brownies (Tamsinn can attest), deliriously chic and fun hats, now these inventive yummy seasonings and blends - you're a house afire for sure. Can't wait to get back and try a few. It's particularly special the whole family contributes with their gifts. Hurray & Hugs to you all.

Report Objectionable Content
Email Town Square Moderator
1 person likes this
Posted by Southbay Vy
a resident of another community
on Jul 19, 2019 at 9:47 am

Great products, great people!! The secret is out! Better stock up while I can :)

Report Objectionable Content
Email Town Square Moderator
1 person likes this
Posted by Valerie
a resident of another community
on Jul 19, 2019 at 11:42 am

Can you stay healthy without making more trash?
By Sherry Listgarten | 7 comments | 3,331 views

Think about helping others in our coronavirus-affected area
By Diana Diamond | 7 comments | 3,024 views

The University of California’s flexible policies during COVID-19
By John Raftrey and Lori McCormick | 6 comments | 1,685 views