City's proximity to major faults could have a severe impact 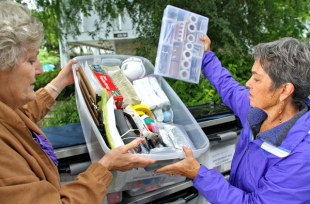 Palo Alto officials recommend building a kit with supplies in the event of a major earthquake or other large disasters. Weekly file photo.

5 people like this
Posted by Resident Gives Tips to City
a resident of Another Palo Alto neighborhood
on Jul 10, 2019 at 7:10 pm

Stop overbuilding on old infrastructure. When people die because of old infrastructure coupled with stupid greed-induced density as this article warns, it will be a stain on YOUR souls past and present Build Baby Build Council majority (Liz Kniss, Adrian Fine, Greg Scharff). Your families will be just as prone to being caught in a major post-earthquake fire, I hope you realize. Those get out of control because of density. Coffey Park in Santa Tosa was as much a man made disaster.

Residents. Stop voting against your safety. Get government that puts safety first rather than aggressively compromising your safety then giving you a few “tips”. Do keep defensible space but also upgrade your foundation and get fire retardant spray gels to cover your home because there won’t be anyone to help they’ll be too busy with the overwhelming number of non-taxpaying workers whose non-tax paying companies took over Palo Alto and City Council for their selfish short-term interests, who will be trapped unable to evacuate because of the stupid shortsighted planning

Tip to City: Safety departments like fire should not be subordinate to planning. The safety of your families is at stake too.

4 people like this
Posted by Resident
a resident of Another Palo Alto neighborhood
on Jul 10, 2019 at 7:38 pm

Palo Alto's power comes in on one feed on huge pylons in the Baylands. In the event of an earthquake it would make sense that our power feed comes in from more than one source. Of course two feeds could both be compromised in the "big one", but having one feed makes no sense for a moderate quake that could bring down just one pylon.xBeCV

Report Objectionable Content
Email Town Square Moderator
4 people like this
Posted by Xiao Ping
a resident of Crescent Park
on Jul 10, 2019 at 7:52 pm