Current tenants have until end of month to vacate 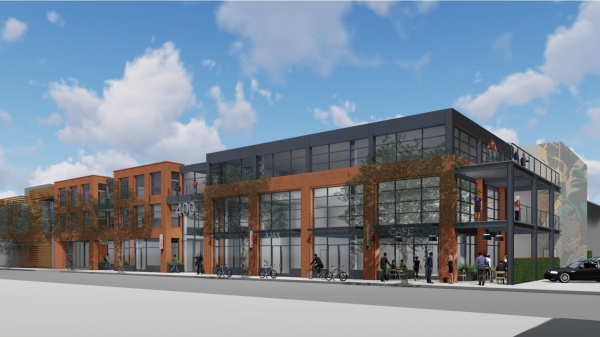 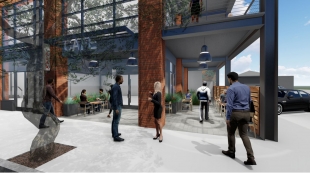 After four years on the drawing board, a new retail-and-office building project on Cambridge Avenue in Palo Alto's California Avenue business district could break ground this fall. Current tenants at 378 through 410 Cambridge have received eviction notices to leave by July 31, and the developer, Cambridge Investments LLC, has submitted a demolition-permit application to the city.

Current tenants include a barber shop, a real estate developer, a tech-staffing company, a publication, a therapist, a venture capitalist, an artificial intelligence company and a Rolfing practice among others, according to signs on the building.

Some tenants said they have known for a long time they would be moving and received formal eviction letters last month.

The proposal has taken four years to gain the city's approval. The initial design was deemed too boxy by the Architectural Review Board. The final version altered the front façade from stucco to brick, which offers more contrasting hues and also fits better into the context of the California Avenue area, where there are other brick structures, the developer noted.

To address concerns about the building's mass, architects created an 11-foot set back at the front eastern corner, which includes an outdoor seating area beneath steel decks and an area for public art facing the adjoining public parking lot.

The development, initially proposed in 2015, also faced opposition from neighbors and existing small-business owners who worried that it will not serve the neighborhood. Owner representative Steve Pierce of Greenheart Land Co. said on Tuesday that the company worked with neighbors to come up with a proposal that took their concerns into account.

The property is adjacent to condominiums to its west, so the developer added light wells that provide light, air and setbacks for the condos. The back of the building is set back 10 feet from the rear property line, which has a 7-foot-high fence and landscaping to screen the building from neighbors, according to the plans.

The new development will increase parking from two spots to 15, Pierce noted, including 10 to serve the retailers and five for office use. It will also have 12 bicycle-parking spaces.

The plan removes one street tree at the southwest corner to make way for the garage entrance, but adds another at the southeastern corner.

Pierce said the project is awaiting building permits. A demolition permit is under review by the city. Construction could begin late this year or early next year and would take most of the next year, depending on city approvals for the phases of demolition and construction. The company will also submit a construction-logistics plan, he said.

This is pretty blasé... Four years and this is the best version we get?

I know how hard the design approval and entitlement processes can be, but why can't Palo Alto get beyond 3 stories when CalTrain and ECR are right there? Why is there no housing component?

This building doesn't look like its designed for 2020. Palo Alto deserves better. Better City Approval process on both sides, and better buildings and development for the community.

"The new development will merge three lots into one"

Wish I could do that in my R-1 neighborhood. Want a nice cottage on 1/2-acre.


Report Objectionable Content
Email Town Square Moderator
8 people like this
Posted by marc665
a resident of Midtown
on Jul 6, 2019 at 9:44 am

marc665 is a registered user.


@musical . What is stopping you? Years ago Steve Jobs bought the property behind him and pissed people off when he tore down the house to make his backyard bigger. Mark Zuckerberg bought the properties around his to make a compound.

What (other than money) stops you from buying all the properties around yours and tearing down the buildings?

Report Objectionable Content
Email Town Square Moderator
11 people like this
Posted by Resident
a resident of Another Palo Alto neighborhood
on Jul 6, 2019 at 6:27 pm

When we lose retail and it is replaced with a new development it brings in different types of retail.

When San Antonio was redone, we lost places like a useful shoe shop, a useful sports shop, a useful drugstore, and in its place we have a mattress shop and a high end jewelers. I used the old retail regularly, never bought a mattress and have bought a couple of Christmas gifts in the jewelers but there is not an equal comparison between useful everyday retail and luxury retail.

Report Objectionable Content
Email Town Square Moderator
8 people like this
Posted by Judith Wasserman
a resident of Leland Manor/Garland Drive
on Jul 8, 2019 at 10:50 am


@under-developed - This IS a 3 story building. Not every new building has to make a statement, so you are right, this is a kind of boring background building, which is just fine.
On the other hand, you are also right - there should be at least a few apartments on top.

@resident - There is no retail there now, only services. So, who knows what will go in?

@Sue Dremann - When writing about buildings, especially new ones, and particularly those going through design review, please tell us the names of the architects.

Report Objectionable Content
Email Town Square Moderator
2 people like this
Posted by musical
a resident of Palo Verde
on Jul 8, 2019 at 12:46 pm


Report Objectionable Content
Email Town Square Moderator
1 person likes this
Posted by Anon
a resident of Evergreen Park
on Jul 11, 2019 at 8:10 am

Interesting to note this developer could have used the PTOD zoning designation to get more square feet if a residential component was included in the project but chose not to.
The PTOD was hoping to encourage housing in mixed use projects near a Caltrain stop.

Singapore's oldest cafe was about to open in Palo Alto. Then, the coronavirus hit.
By Elena Kadvany | 2 comments | 5,960 views

A Pragmatic Approach to A Trillion Trees
By Sherry Listgarten | 4 comments | 4,217 views

Repairing a Disagreement with your Beloved & “Physical” vs. “Social” Distancing
By Chandrama Anderson | 2 comments | 2,904 views

The University of California’s flexible policies during COVID-19
By John Raftrey and Lori McCormick | 6 comments | 2,760 views