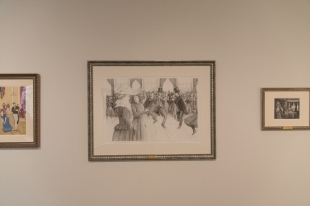 From left, Kathy Aoki's lithographs, "(She) Twerkin'," "Gangnam Style (At the Moulin Rouge)," and "The Twerking Lesson" from 2014 on display at the Palo Alto Art Center. Photo by Sinead Chang.