Facility slated to be completed in late September 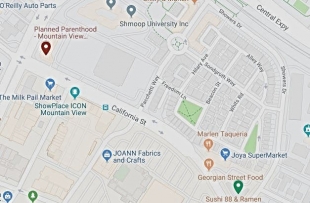 Planned Parenthood plans to move from its current office at 225 San Antonio Road, red bulletpoint above, to a new facility at 2500 California St., green bulletpoint above, in Mountain View where Santa Clara County will lease a portion of the clinic. Image courtesy Google Maps.