He was a married hospital technician and a Boy Scouts leader. Was former Palo Alto resident John Getreu also a serial killer?

Living in Midtown in the 1970s, Getreu's criminal past was unknown; now he stands accused of the cold-case murders of two women on Stanford land 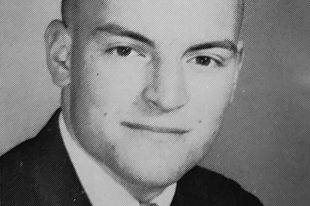 John Arthur Getreu in 1963, the year he murdered classmate Margaret Williams, 15, outside a chapel in Bad Kreuznach, Germany.

The bottom line is that one really (or ever) knows...until there is more evidence or public outcry pertaining to a crime having been committed.

There are Eagle Scouts in state prison and the countless Catholic priest scandals speak volumes.

Outward appearances and images often mean very little as how well do we really know those people we are only mildly acquainted with in specific social environments?

Sometimes being on one's 'best behavior' in a given scenario is just an act. People put on fronts all the time.

Report Objectionable Content
Email Town Square Moderator
19 people like this
Posted by profiling
a resident of Downtown North
on Jun 21, 2019 at 9:38 am

Just more proof that crime prevention based on racial profiling is a hoax.

Report Objectionable Content
Email Town Square Moderator
10 people like this
Posted by Anon
a resident of Another Palo Alto neighborhood
on Jun 21, 2019 at 10:01 am

Posted by profiling, a resident of Downtown North

>> Just more proof that crime prevention based on racial profiling is a hoax.

More generally, the Father Brown vs Sherlock Holmes "debate". Lots of ordinary criminals are not smart enough to outwit the Father Brown approach, but, catching the most serious and dangerous criminals requires objective evidence.

There are many hundreds of thousands of untested rape kits that can unlock many of these unsolved cases. Web Link Let's do it ASAP.

Report Objectionable Content
Email Town Square Moderator
10 people like this
Posted by Shawn
a resident of Fairmeadow
on Jun 21, 2019 at 11:27 am

Report Objectionable Content
Email Town Square Moderator
12 people like this
Posted by Drawing The Line
a resident of Barron Park
on Jun 21, 2019 at 11:35 am


The DEPORT comment was probably meant as a sarcastic reference to the notion that immigrants are the "bad hombres". This case is a notable counterexample.

Report Objectionable Content
Email Town Square Moderator
17 people like this
Posted by Paris
a resident of Another Palo Alto neighborhood
on Jun 21, 2019 at 1:16 pm

I’m just “happy” that these unsolved murder cases are now being solved thru DNA and that these murders (after decades of being free) are now in prison for the rest of their life.

Report Objectionable Content
Email Town Square Moderator
9 people like this
Posted by Know Thyself
a resident of Barron Park
on Jun 21, 2019 at 5:40 pm

from the PA Weekly:
"a seemingly normal person..."

What is normal? As another poster noted, people often do not reveal their true selves.

By now, no one should be shocked by anything that occurs these days.

Report Objectionable Content
Email Town Square Moderator
6 people like this
Posted by Protect the public
a resident of Duveneck/St. Francis
on Jun 21, 2019 at 9:46 pm

One thing we do know: locking up convicted, dangerous criminals prevents future victims. Yet, trends are to remove the death penalty, be very forgiving/lax on minors who commit heinous crimes (see public television’s ongoing sympathetic campaign favoring youth criminals), in general to lessen penalties/jail time.
So - we risk repeat offenders like men who horrifically victimize women, as told here.
I prefer to protect society, but to CA politicians, that’s not politically correct. Expect crime to get worse.
Check out certain politicians now married to billionaire heiresses, Hollywood celebrities, for example - THEY live behind tall, secure gates in their luxury homes and are protected.
But our jails are full! - was the cry of politicians in recent years. I don’t care. If we’re discussing a country with laws, and those convicted of violating those laws, there should be a penalty. “Restorative justice” is a politically correct joke. If it takes - regrettably - filling the jails, then that is the reality! The public needs to be protected from violent men like these - caught much later via DNA. I don’t use names, since these ones have not yet been convicted in a court of law.
I’m all in favor of trying to prevent crime and young men becoming heinous criminals. Sadly, there are some and society needs to be protected, quicker, from them.
- with sadness for the suffering of the young women described in the news story.

Report Objectionable Content
Email Town Square Moderator
6 people like this
Posted by Anon
a resident of Another Palo Alto neighborhood
on Jun 22, 2019 at 10:54 am

Posted by Protect the public, a resident of Duveneck/St. Francis

>> One thing we do know: locking up convicted, dangerous criminals prevents future victims.

A couple of points that need to be considered: -some- of those convicted, dangerous criminals were convicted of crimes that they didn't commit. See "The Central Park jogger case": Web Link In that case, objective evidence was excluded which resulted in the conviction of five young men, when the crime was committed by a different man. -Objective evidence- is the key in determining who the actual criminals are.

>> Yet, trends are to remove the death penalty, be very forgiving/lax on minors who commit heinous crimes

The recent trend is to be more lax with shoplifters, who, under the previous legal framework, could be convicted of multiple felonies for shoplifting and getting 10-year prison sentences. No, I'm not OK with shoplifting.

Flying: A letter from a reader
By Sherry Listgarten | 8 comments | 1,278 views