After confusion over Adult School compensation, teachers poised to get 16% raise

Principal uncertain about how future pay increases should be addressed 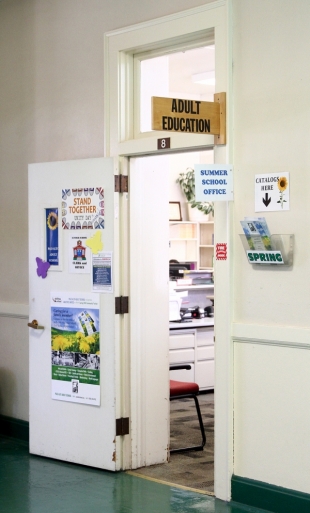 The Palo Alto Board of Education will vote on a 16% increase for hourly rates and a 5% off-scheduled bonus for Palo Alto Adult School teachers at its June 18, 2019 meeting. Photo by Veronica Weber.

The school board will vote Tuesday on a 16% raise for Palo Alto Adult School teachers who, despite the fact that they are formally represented by the teachers union, have not historically received the same negotiated salary increases.

Adult School staff, who are all part-time employees, have gone without a raise since 2016, when they received a 9% increase. This is partially due to confusion over how their salary increases should be handled, a murky process that Adult School Principal Dave Hoshiwara ran into this year.

Hoshiwara's understanding from his predecessors was that Adult School staff were not represented by the Palo Alto Educators Association (PAEA) and it was up to principals to push for salary increases, he said in an interview. He approached Chief Business Officer Jim Novak to discuss a raise, which prompted a closer reading of the teachers' union contract. Novak clarified that the Adult School teachers are in fact included in the contract and informed Hoshiwara that any pay increase had to be formally negotiated.

Kara Rosenberg, who was the school's principal from 2000 to 2014, said her understanding was that only parts of the teachers' union contract applied to her staff. She would request raises equivalent to those negotiated by the union through human resources, which were then approved by the school board. Katya Villalobos, who led the Adult School from 2014 to 2016, said she went through one negotiation cycle and met with former chief business officer Cathy Mak and former assistant superintendent for human resources Scott Bowers to bargain. Her understanding was that the Adult School teachers were not represented by the union.

Teri Baldwin, president of the Palo Alto Educators Association, said the union found out only this year that it represented the Adult School teachers.

"We had been told in the past that the article in the contract was just as a place holder, but that they were not part of PAEA," she said.

The union formed a separate negotiations team and formally bargained with the district on compensation for next year. They agreed on a 16% increase for hourly rates — an ongoing cost of about $147,700 — and a 5% off-schedule bonus this year for certificated employees, a cost of about $38,500. If approved, their rates would go up from $39 to $46 per hour.

"It might sound like a lot but 16% of not very much is still not very much," teacher Eve Sutton told the board last week.

The board approved in May a 2% raise and 2% one-time bonus for teachers, which will cost the district $3.6 million this year.

Adult School staff teach about six to 12 hours per week, according to Hoshiwara. The school is part of the district but operates separately, with its own budget, including state funding and student fees for courses. The school offers a wide variety of classes, from arts, writing and English as a second language to cooking and parenting.

Hoshiwara said he and staff are happy with the negotiated increase for next year but he's still unsure how their raises should be handled in the future. (Baldwin said, however, that the union will negotiate them separately each year going forward.)

"It wasn't a smooth process," Hoshiwara said. "I don't really know how it will go in the future but I would hope it would go a little smoother with less unknowns."

The board heard a brief presentation on the Adult School compensation last week and is set to approve it this Tuesday evening.

In other business Tuesday, which is the last board meeting of this school year, trustees will take action on the districtwide "PAUSD Promise" plan, a cell tower resolution and a 2% bonus and contract extension for Superintendent Don Austin. They will also discuss restructuring the Title IX office, including reducing the Title IX coordinator position from full to part time — a change that is "not reflective of a decreased need for attention to leadership and supervision related to compliance of Title IX and civil rights, but rather a building of internal, sustainable capacity for managing these critical responsibilities," a staff report states.

The district's 2019-20 budget is on the board's consent calendar, where items are approved routinely without discussion.

The meeting will begin at 6:30 p.m. at the district office, 25 Churchill Ave. View the agenda here.

Once again it sounds like our school management is not clear on what they are managing. Is this the same leadership team that triggered the raises because they didn't pay attention to the contracts?

At what point to we declare the management team incompetent, take back their raises and get rid of them?

"At what point to we declare the management team incompetent"

That happened starting two years ago. The current senior team, almost all new in the last 2 years, is cleaning up the sloppy mess left by the previous teams. This sounds like part of the clean-up. Don't shoot the messenger - it sounds like it has been screwed up for a long time and is now being fixed.

Report Objectionable Content
Email Town Square Moderator
5 people like this
Posted by Novelera
a resident of Midtown
on Jun 17, 2019 at 2:46 pm


As a regular student at Paly for the Adult School classes, I am pleased to learn of this increase. The language classes are fabulous!

Report Objectionable Content
Email Town Square Moderator
4 people like this
Posted by Jim H
a resident of Duveneck/St. Francis
on Jun 17, 2019 at 10:31 pm


I find it very hard to believe that the PAEA President, Teri Baldwin, was unaware of the status of Adult School Teachers.

And, how can so many people have no idea how to handle raises for these teachers?

$46/hr for a full-time job would be equivilent to earning $92,000/yr. I would call that pretty good money for a side hustle. Also, I do not believe that Adult School Teachers need to hold a teaching certificate. Could be wrong.

Report Objectionable Content
Email Town Square Moderator
10 people like this
Posted by Cover-up Culture
a resident of Community Center
on Jun 17, 2019 at 11:05 pm

Wow, congratulations to all on figuring out who is and isn't represented by whom! From this example I have so much confidence in all of you in educating our children.

Glad the teacher's union found some more folks to dun dues from - I was so worried their tight, tight tyrannical grip over the district might begin to falter...:-(

So Pausd adult ed part time teachers make $92k now thanks to the teachers union. Full time Pausd teachers must make more then, actually they make more/day than the average tech worker in the bay area, w better benefits! Still see the need to cede public land and spend lots of dough at the teacher's union's behest to house non low income Pausd teachers at cubberley? I don't think so.

Report Objectionable Content
Email Town Square Moderator
7 people like this
Posted by Teacher
a resident of Mountain View
on Jun 18, 2019 at 10:35 am

I'm assuming the people posting here claiming how much money adult school teachers make have never worked as either an adult school or community college teacher.

1. Yes, adult schools which are part of K-12 districts require teachers to have a credential. You may be confusing this with teaching something like ESL in a library or a nonprofit which doesn't require a credential.

2. Most adult schools aren't able to offer the majority of their teachers more than a few morning and evening assignments which may come out to anywhere between 3-12 hours per week at one school. To earn close to a full time salary, teachers need to work at multiple schools where they often have a day where they work from 9-12pm, then 1-3pm, then 7-9pm at different sites. Keep in mind, you are only getting paid when classes are in session so you aren't getting paid in between sessions, during holidays, and if summer classes aren't offered. In addition to the classroom time which they are only paid for, it doesn't include lesson planning, curriculum development, grading, and responding to students. I was doing that at one point working at both adult schools and community colleges, and had a similar schedule five days a week at five different schools to piece together enough work and was spending most of my weekends lesson planning and grading, essentially working about 80 hours per week for about 70k a year without benefits due to being part time. I think usually at this point, there's the argument that some people make that's something along the lines of "well you chose to do this work" which is not particularly helpful and extremely dismissive of the value of education.

3. Community Colleges in the area pay their teachers $70-100 an hour but I would challenge you to find any adjunct college instructor or adult ed teacher getting paid 92k. You can look on transparentcalifornia.com to verify. If being a part time teacher paid so much, there wouldn't be so many adjunct instructors in the area fighting tooth and nail for full time positions at community colleges that start at around 70k.

Report Objectionable Content
Email Town Square Moderator
2 people like this
Posted by Jim H
a resident of Duveneck/St. Francis
on Jun 18, 2019 at 11:23 am


@Teacher,
So, even the teachers teaching the classes such as Birding and Nature, Gardening and Sewing all have CA teaching credentials?

Bigger concern, especially for the teachers, is the fact that no one seems to know how they should be recognized. If all of these teachers are credentialed, then why has PAEA essentially disowned them?

Report Objectionable Content
Email Town Square Moderator
5 people like this
Posted by Teacher
a resident of Mountain View
on Jun 18, 2019 at 11:57 am

Teachers who teach in the community fee based programs (the ones you mentioned) often don't need to be credentialed because their money isn't coming from federal/state grants. They're coming from the fees that students pay. I'm not sure about Palo Alto Adult School, but other schools I've been at put fee based teachers on separate salary schedules because they aren't counted as certificated. Their pay is usually lower.

That's not uncommon for adult education. Adult schools and their teachers are usually the last thing on the districts' minds as they have completely separate funding streams (all that property tax money wealthy districts get usually doesn't go to the adult schools) and less pressure from the community (ie parents). Also because of the nature of adult ed being primarily part time and temporary work assignments, the job descriptions don't align with the existing K12 teacher contracts.

The first few seconds after awakening; before I remember the virus
By Chandrama Anderson | 0 comments | 3,555 views

Can you stay healthy without making more trash?
By Sherry Listgarten | 6 comments | 2,957 views

Think about helping others in our coronavirus-affected area
By Diana Diamond | 7 comments | 2,692 views