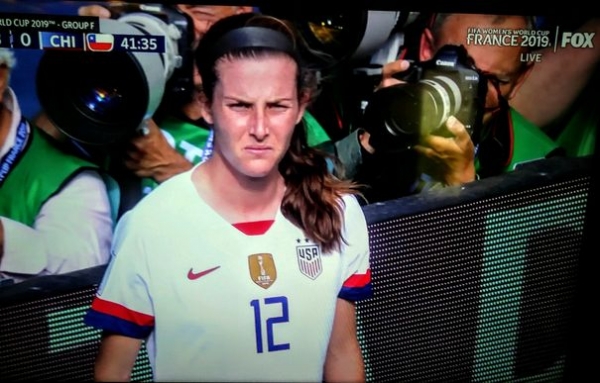 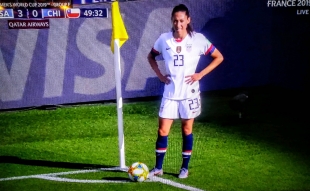 Carli Lloyd and Julie Ertz finished off headers into the back of the net off corner kicks, Ertz from the near post and Lloyd from the far post. Both shots were nearly impossible to stop.

Davidson was one of seven players who started and played in the World Cup for the first time as coach Jill Ellis flipped the lineup to help keep several veteran players (like Alex Morgan, who scored five goals in USA's 13-0 win over Thailand) fresh for the knockout stage.

It doesn’t seem to matter who Ellis puts on the pitch, the Americans played seamlessly in France as they can look ahead to their final group match against No. 9 Sweden at Stade Océane in Le Havre at noon Thursday.

After allowing 10 goals through its first six matches, Team USA has not allowed a score over its past six matches. The Americans have outscored their opponents 33-0 over that span.

Davidson blended into the U.S. system as effortlessly as she did with Stanford the past three years. She was always around the action and no one could ask for better-placed corners than she took.

Fellow Menlo Park resident and former Sacred Heart Prep star Abby Dahlkemper continued her steady play in the back and remained poised and in position when Chile did manage to find itself in the U.S. zone.

Former Hermann Trophy winner and Stanford product Christen Press got a start on the forward line after coming subbing in and grabbing an assist against Thailand. She had a couple of nice chances and played under control.

Stanford grad Kelley O'Hara, who has been beset with injuries the past few years, also got a rest. She played the full match against Thailand.

Davidson became the youngest player to start a World Cup match for the U.S. in 24 years and is the sixth player under age 21 to start a match.

The first few seconds after awakening; before I remember the virus
By Chandrama Anderson | 0 comments | 3,031 views

Can you stay healthy without making more trash?
By Sherry Listgarten | 4 comments | 2,428 views

Think about helping others in our coronavirus-affected area
By Diana Diamond | 5 comments | 2,259 views