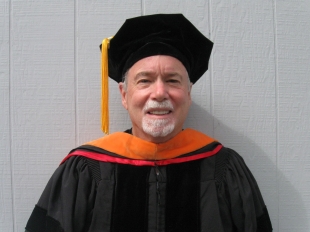 Alan Zorn, 70, is graduating from Stanford University with a doctorate in aeronautics and astronautics on June 16, 2019. Photo courtesy Alan Zorn.

For Alan Zorn, who at 70 is the oldest person in his class, graduating with a doctorate in aeronautics and astronautics from Stanford University this Sunday, June 16, after 15 years of intense work and keeping up with students more than half his age only makes him hungry for more.

In 2004, when Zorn was in his 50s, he decided to apply for his doctorate knowing his job in high-powered engineering management was ending and money was getting tight.

After retiring, he applied to several prestigious institutions. He was rejected by Princeton University and almost attended Massachusetts Institute of Technology before he decided to enroll at Stanford, where he was offered financial aid and a spot in a class of 60 students.

Finishing the program didn't come fast or easy. Over the course of 15 years, Zorn changed advisers twice, switched his research from GPS and inertial navigation to optimal space flight, and ended up helping fellow classmates launch the startup Skybox Imaging before joining startup AOSense Inc. as director of navigation systems during the same year. He's still employed there today.

Zorn said even though he spent more time focused on the startups and ignored his dissertation between 2009 and 2013, he remained enrolled in school.

His graduation from the program was delayed several more years by a family emergency followed by an injury.

But in 2018, he defended his dissertation and finally submitted it last week.

Zorn reminisced in an interview with the Weekly about the times he spent inspiring the younger students and motivating them to write their papers. He also appreciated the mentorship that went both ways with members of his cohort, he said.

"There's a very strong social connection with these students that we have still today," Zorn said, adding he still tries to throw parties and invites former classmates.

But it wasn't all fun and games. Zorn said he can understand why he doesn't cross paths with other people his age pursuing higher education.

"It's a huge and painful commitment," Zorn said. The competition with younger minds who "ran circles" around him was tough, Zorn added.

"They have spectacular memories, I don't," he said.

Zorn described his experience as very non-traditional because few others, young or old, have his experience and drive. He wanted to reach for the stars by finishing his doctorate and is willing to mentor people his age to do the same.

As for his graduation this Sunday, Zorn said he's looking forward to watching his wife, Molly, as he walks across the stage and accepts the diploma.

"She waited a long, long time for this to happen. We both think it is a total miracle that it is actually happening," said Zorn, who has no plans to slow down after graduation

With his 150-page dissertation on multipoint optimal control with applications to space flight, Zorn hopes to continue his work and continue his research on getting around places in outer space with less fuel.

Congratulations! Such an example.

Mac Clayton is a registered user.

Former Paly High girl - I finished my Bachelor’s at 50, my Master’s at 53. Debated a PhD. . You’re making me rethink that. You rock!

Singapore's oldest cafe was about to open in Palo Alto. Then, the coronavirus hit.
By Elena Kadvany | 2 comments | 5,764 views

A Pragmatic Approach to A Trillion Trees
By Sherry Listgarten | 4 comments | 4,203 views

Repairing a Disagreement with your Beloved & “Physical” vs. “Social” Distancing
By Chandrama Anderson | 2 comments | 2,891 views

The University of California’s flexible policies during COVID-19
By John Raftrey and Lori McCormick | 6 comments | 2,752 views