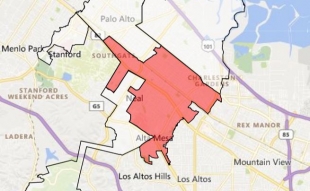 Nearly 3,000 Palo Alto Utilities customers in the southern section of the city woke up without electricity on Thursday morning due to a power outage caused by a seagull that hit power lines, according to the agency.

The outage impacting about 2,900 customers started around 6 a.m. Initially, Palo Alto Utilities initially said it was possibly caused by a tree impacting power lines, but later determined it was a seagull that crossed the wires, the agency said on Twitter.

Several neighborhoods were affected by the outage, including St. Claire Gardens, Charleston Meadow and Green Acres, in addition to portions of College Terrace and Southgate.

3 people like this
Posted by Resident
a resident of Another Palo Alto neighborhood
on Jun 6, 2019 at 7:57 am

Again!!!! Tree impacts when it is not raining!

I can't understand how backward we are. Get these powerlines underground.

So does this mean the Palo Alto Utilities will preventively shut off power whenever they anticipate flying sea gulls?

Where are the dedicated spotters in high towers 7/24 looking out for the birds and other animals at risk of being electrocuted? This blatant dis-regard for the endangerment of the wildlife has got to stop. We have to stop killing the local species.

Palo Alto residents will have to adjust to having electrical power for only a few hours a day when it can be guaranteed that no wildlife will be at risk.

Power also went out in Barron Park just after 6 AM, and we were back up at 7:40. I called the 496 number to report the outage and was switched automatically to 911, here they told me they already knew about the outage and were working on it.

Report Objectionable Content
Email Town Square Moderator
9 people like this
Posted by Arthur Keller
a resident of Adobe-Meadow
on Jun 6, 2019 at 11:07 am

Do we need a smarter grid so outages are more localized, there is more redundant transmission capacity, and power could be routed around the problem? Technology is available to do these things, including quickly turning off the power (including automatically) when a power line goes down (such as from a tree fall).

Such a system would give us more resilience from a conflagration in the hills.

And where is our second transmission line into our local grid? Do we still have a single point of failure transmission line running by our airport? I understand there is a power line owned by PG&E over 101 that is limiting our options with the bike bridge at Adobe Creek, but it is unused. Can we get PG&E to upgrade it to provide redundancy? There was also a proposal to get power through SLAC’s transmission line. Whatever happened to that idea?

Report Objectionable Content
Email Town Square Moderator
11 people like this
Posted by Arthur Keller
a resident of Adobe-Meadow
on Jun 6, 2019 at 11:11 am

Report Objectionable Content
Email Town Square Moderator
2 people like this
Posted by Bill
a resident of Barron Park
on Jun 6, 2019 at 12:34 pm

Ok, we all love our Palo Alto Fire Department, Police Department, Utilities and Public Works folks for protecting us and keeping us safe. In generally they do a terrific job.

But, Engine 62 was dispatched to Cypress Lane at 6:03 AM where the Seagull met it's unfortunate end. This apparently caused a surge on the high voltage distribution line. Breakers tripped and a high voltage line came down onto the street in the 3600 block of Whitsell Avenue.

Thankfully, the line on the ground wasn't energized. But there was nobody on Whitsell for almost an hour. No fire, no police, no utilities. Not good. Where did Engine 62 go? Where was PAPD with traffic cones to block off the street?

Come on folks, you can do better than this!

Report Objectionable Content
Email Town Square Moderator
6 people like this
Posted by The Numbers Game
a resident of Adobe-Meadow
on Jun 6, 2019 at 12:55 pm

> This blatant dis-regard for the endangerment of the wildlife has got to stop. We have to stop killing the local species.

I doubt if PA is going to run out of seagulls, crows & squirrels.

Report Objectionable Content
Email Town Square Moderator
2 people like this
Posted by Not Again
a resident of Barron Park
on Jun 10, 2019 at 3:19 pm

Another power outage today. Same area. I hope no seagulls died in this one...

A Pragmatic Approach to A Trillion Trees
By Sherry Listgarten | 1 comment | 2,517 views

The University of California’s flexible policies during COVID-19
By John Raftrey and Lori McCormick | 6 comments | 1,920 views

Repairing a Disagreement with your Beloved & “Physical” vs. “Social” Distancing
By Chandrama Anderson | 0 comments | 1,279 views