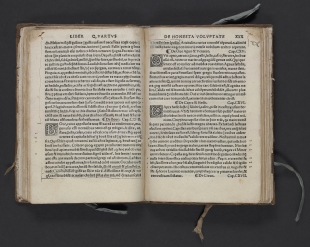 Vatican librarian Bartolomeo Platina's advice on how to prepare beef — a section of his popular cookbook that probably didn’t appeal to Leonardo, if he was indeed a vegetarian. From Bartolomeo Platina, "De honesta voluptate acvalitudine libri decem." Image courtesy of Stanford Libraries Special Collections.

the_punnisher is a registered user.

From the owner of LV Mar and La Viga, a Palo Alto restaurant inspired by Mexico City
By Elena Kadvany | 4 comments | 3,813 views

Can you Pay to Reduce your Carbon Footprint?
By Sherry Listgarten | 10 comments | 2,658 views