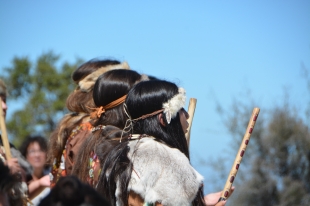 Calling all tree huggers, sky gazers, mountain climbers and nature lovers -- and movie fans, too. A plethora of short films showcasing the beauty of nature, the importance of environmental conservation, the wonders of science and more will be screened as part of the free Wild & Scenic Film Festival, co-presented by Peninsula Open Space Trust (POST) and the Midpeninsula Open Space District and coming to Foothill College on Sunday, May 26.

"For POST and Midpen, the festival is about bringing our communities together to celebrate conservation, people and our relationship with nature, and to build community among residents of the Peninsula and the South Bay," POST's Senior Manager of Community Engagement Mark Medeiros said.

For local viewers, a likely highlight will be the inclusion of "Umunhum," a film about the restoration of Mt. Umunhum (pronounced "um-un-um"), located in the Sierra Azul Open Space Preserve, which is managed by the open space district. Sacred to the indigenous Amah Mutsun Tribal Band, the mountain was in the 1950s home to the Almaden Air Force Station and left in damaged condition. Midpen purchased the site from the U.S. military in 1986 and worked closely with the Amah Mutsun Tribal Band on its restoration, opening it to the public in 2017. The mountain (it's one of the highest peaks in the Santa Cruz range) offers views from the Sierra Nevadas to the Pacific Ocean, is home to incredible biodiversity and is still an important cultural site. The restoration and public opening of Mt. Umunhum is a success story about what can be accomplished when communities work together, film producer Annie Burke told the Weekly.

Burke, who grew up in the East Bay, said she's fallen in love with the "stunning" space and continues to learn from her experience making the film.

"There are a lot of reasons why people are interested in this story. For some it's about history, for some it's about the ecology ... for some people it's a social justice and environmental justice story," she said. "Every time I have a conversation about the film I learn something new or see another layer. It is really a very hopeful story, about taking something damaged, cleaning it up and finding commonality."

Other films to be screened include "March of the Newts," about the intriguing forest amphibians and the emerging disease they face; "Sky Migrations," about migratory raptors and the scientists who work to conserve them; "Our National Parks belong to everyone. So why are they so white?," a video exploring the conservation movement's struggle with inclusivity; and "Dragging 235 lbs uphill both ways," about a mother who decides to restrict her children's screen time in favor of time in the great outdoors.

In addition to the 13 films screened, the event will also feature free refreshments; a raffle with prizes donated by businesses including REI, Patagonia and Sports Basement; and information from local environmental groups.

Wild & Scenic Film Festival is organized by the South Yuba River Citizens League, with a large, annual flagship festival held in Nevada City, California. The touring version of the festival travels to around 250 community events each year.

Falling as it does over the long Memorial Day weekend and in the spirit of the nature-celebrating event, Medeiros suggested attendees enjoy a hike earlier in the day, then head to Foothill for the evening's festivities.

"This one of the first large collaborative events we've done together," he said, in regards to POST and Midpen's co-sponsoring of the festival. "We're really excited to bring so many people together to enjoy it."

The first few seconds after awakening; before I remember the virus
By Chandrama Anderson | 0 comments | 2,218 views

Can you Stay Healthy without Making More Trash?
By Sherry Listgarten | 3 comments | 1,542 views

Think about helping others in our coronavirus-affected area
By Diana Diamond | 2 comments | 1,090 views