Editorial: A parking strategy drowning in complexity and frustration seeks a lifeline 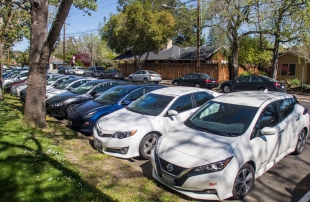 Parked cars line the street on High Street in front of Bowden Park which has no parking restrictions. Residents say the cars often belong to Caltrain commuters and office workers in the California Avenue business district. Photo by Veronica Weber.

4 people like this
Posted by Resident
a resident of Another Palo Alto neighborhood
on May 17, 2019 at 8:28 am

The RPP is a game of musical chairs. It doesn't stop parking, it just moves it. Parkers will move just outside one of these areas and then use bikes, scooters, skate boards, etc. to get to where they want to go.

As far as I can see it, the only thing that will stop this is parking lots at the off ramps with dedicated shuttles to the business areas.

For people who car pool, people who only want to park a couple of days a week, or those who need to use a loaner car, or a spouse's car for a time, the RPP does not work.

More innovation please, and BTW, why not use technology to do this. Parking apps on phones, sites that rent driveway parking spaces for daytime use, and of course those electronic space available signs at garages which were promised but haven't arrived, are all suitable solutions that should not take parking officials much effort since they all exist and are used well elsewhere.

NeilsonBuchanan is a registered user.


Problems will be eased slowly with adequate financial and human resources to address fundamental flaws in management of commercial core parking. This must be coupled with the overdue improvements in the RPPs.

All of this effort to "improve" is moot until the new operating and capital budgets are approved in June for the next five years. New FY20/21 budgets are not the final answer. The final answer is when City Manager and Council actually release the funds.

What is the timeline for the Planning Commission to hold hearings on dozens of parking issues and send recommendations to Council? Are these recommendations in sync with the budgeting process coming to close in June 2019? Or are we in limbo until FY21/22 budgets and staffing are reasonably aligned? I honestly dont know. And I dont know who knows.

Report Objectionable Content
Email Town Square Moderator
11 people like this
Posted by Evergreen Park Resident
a resident of Evergreen Park
on May 17, 2019 at 3:09 pm

I am very disappointed to see the Council walk away from its prior commitment to residents. Namely, the Council has said, as part of our overall strategic plan, that the goal is to reduce commercial parking in residential areas. The reason residents supported paying for a new public garage in the California Ave area out of tax dollars (not private funds contributed by the business community) was the commitment that such a garage would be used to reduce the commercial parking in Mayfield/Evergreen Park. Now, the Council refused to affirm this policy and to direct the PTC to operate to implement this policy. Bait and switch is a term some might use for this process.

Second, one of the reasons why the RPP system is so complicated is that (1) the City walked away from the simple model used in College Terrace where no commercial/employee permits are sold, and (2) they have failed to adopt a new computerized system that could handle all of the various requirements. I participated in sessions where firms were interviewed, and at one of the firms was quite capable of creating an effective system for us. Months later, apparently nothing has happened to get this project moved forward. With no budgetary or other support, how do you expect anything to get done?

The City Council has continued its refusal to institute a business tax that could be used to fund projects such as this that must be done to solve the problems that businesses themselves have created by building businesses that do not provide enough parking for their employees. They wish to reduce the costs of their facilities, and then foist those costs back onto residents.
The City Council apparently believe this is appropriate. I do not.

Finally, I am a bit tired of being treated if I were simply another "stakeholder" on par with developers who do not live, vote, or pay taxes in Palo Alto. Those who live here should decide how they wish to accommodate businesses that they want to have in their community. The residents need to be driving this bus.

Report Objectionable Content
Email Town Square Moderator
7 people like this
Posted by Anon
a resident of Another Palo Alto neighborhood
on May 17, 2019 at 4:41 pm

>> Finally, I am a bit tired of being treated if I were simply another "stakeholder" on par with developers who do not live, vote, or pay taxes in Palo Alto. Those who live here should decide how they wish to accommodate businesses that they want to have in their community. The residents need to be driving this bus.

Palo Alto has too much office space. The result is all the other Weekly/Town Square headline topics: too much traffic, not enough parking, not enough affordable housing, public services: teachers, firefighters, police, all cost too much and yet they can't afford to live here, all the real people from student to elderly are just scraping by because housing and services cost too much, a big surge in homeless people, not nearly enough BMR housing, and, $9M for an empty residential lot. Just read the topical headlines.

Back in the 70's -- that is 1970's for all you youngsters under 40, housing was actually affordable and available for people who didn't have much money-- me at the time. Gentrification is now creating constant social dislocation and pressure on so many areas. We have to stop building more office space and have to stop adding white-collar jobs-- this has become a negative-sum game.

'Are they ready for fully innovative Indian food?' Ettan arrives in Palo Alto with chaat, caviar and a secret menu
By Elena Kadvany | 0 comments | 3,614 views

Flying: How to lower your impact
By Sherry Listgarten | 11 comments | 2,591 views