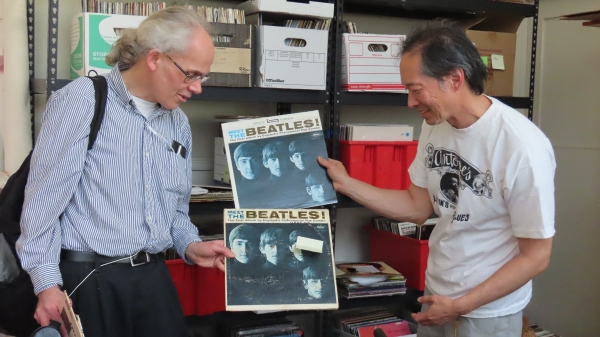 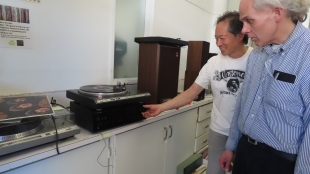 Henry Yu and Frank McConnell play a record on one of FOPAL's donated turntables. Photo by Christian Trujano.

Henry Yu and Frank McConnell have spent the last two months sorting through boxes and crates filled with vinyl records.

Accumulated over the course of about five years, the vast collection features hundreds of rare and vintage albums from various genres including jazz, classical, funk, soul, classic rock and reggae, among others. There are so many records, they fill an entire room at Cubberley Community Center in south Palo Alto, covering most of the floor and stacked high along the walls.

Yu and McConnell, volunteers for the nonprofit Friends of the Palo Alto Library (FOPAL), were tasked with individually pricing each record by this Saturday, May 11, when all of them will go on sale.

They've spent hours on the job, fueled by a love for vinyl and a nostalgia for their 1970s childhoods — long before the days of CDs, MP3s and digital streaming. Among Yu's favorite records were Journey's "Infinity," released in 1978 and The Ramones 1977 album "Rocket to Russia." McConnell said that Tangerine Dream albums made for "good study music."

"Way back when in the '70s and '80s, that was just how you bought recorded music," McConnell said of his introduction to vinyl. "These days I have LPs, I have a turntable, I have CDs, I listen on my iPhone, I buy MP3s; I'm in it for the music and I don't care what format it's in."

Although people have a number of options to purchase music these days, vinyl has transcended generations, becoming a timeless and beloved form of recorded music.

"People just really like the physicality of the 12-inch disc and the sleeve that it comes in," McConnell said.

Collecting vinyl has also become popular among younger music lovers. According to BuzzAngle, a data company that tracks U.S. music consumption, vinyl sales grew about 12% from 2017 to 2018. And vinyl album sales made up nearly 14% of all physical album sales for that year. Rolling Stone credits the revival of vinyl's popularity to the sentimental value connected to it.

Palo Alto High School senior Lucas Washburn said he became interested in collecting records after finding a free turntable. Now, listening to vintage albums has become a bonding experience among him, his younger brother and their dad.

"When I come home with some new records (my dad) will say, 'I used to listen to those all the time when I was younger,' so it's interesting to hear him talk about them," Washburn said as he combed through FOPAL's collection in search of a Grateful Dead album, coming across Pink Floyd, Jimi Hendrix and Bob Dylan records in the process.

McConnell and Yu attributed the resurgence of vinyl's popularity to the one-of-a-kind experience of watching the records spin as the music plays out. This, they said, cultivates a special connection to the music that digital formats cannot provide.

The ability to see and feel a record, Yu said, is "all part of the package," which also includes the album artwork, liner notes, details about who played what instruments on which songs, who wrote which songs and all of the discographical information that typically comes with a large format album. Additionally, fellow volunteer Amy Rosenberg and Yu both referenced "the crackling sound" of the turntable needle in the vinyl grooves while the record spins as being a significant component of the unique vinyl listening experience.

Attempts have been made to recreate the vinyl experience using digital tools. McConnell alluded to Apple's iTunes LP format, which ultimately was unsuccessful.

"I don’t think it ever really caught on," he said.

Launched in 2009, iTunes LPs featured interactive artwork and the format was designed as a way for users to purchase albums bundled with bonus tracks, liner notes, music videos and other elements in an effort to encourage people to buy complete albums rather than individual songs. However, Apple halted the format in March 2018. While people who already bought iTunes LP content can still access their purchases, the company stopped accepting and offering new submissions, according to Apple Insider.

Although FOPAL has always sold records during its book sales held every second Saturday and Sunday of each month, they’ve never been the primary focus until now.

"We’re very interested in bringing people in to buy these records who will keep them and listen to them and value them," said Rosenberg, noting that the sale isn't aimed at record store owners who want to buy them at a discounted rate and then mark the prices up to sell in their own stores.

In addition to getting the albums out of boxes and into the hands of people who will appreciate them, another goal of the sale is to clear the pipeline to make way for new donations.

According to Rosenberg, vintage vinyl records also make great gifts. She said she often sends them to her friends and family who love receiving them because they spark fond memories for older generations, and younger generations find clever ways to repurpose them, such as placing them in frames and hanging them around their homes or in their childrens' bedrooms.

As for FOPAL's prices, Washburn said they’re tough to beat.

"It’s almost like a record store here, but the prices are like half the record store prices, so it’s pretty nice," he said.

Most of the records are priced between $1 and $10, with the exception of some more valuable rarities.

IF YOU'RE GOING The vinyl sale is set for Saturday, May 11, from 10 a.m. to 4 p.m. in room M-3 at Cubberley Community Center located at 4000 Middlefield Road. FOPAL also hosts its monthly book sale this weekend. More information about both sales is posted at fopal.org.


Maybe I’ll buy back all the records I donated.

Is there still time to donate?

Have to look to replace that old Mott the Hoople vinyl...

And a little trivia. Q How many grooves on a record? A only one. If you don't get it, think about it. If you still can't get it, ask your grandparents, or your Mom, something to talk about on Mothers' Day.

A Pragmatic Approach to A Trillion Trees
By Sherry Listgarten | 4 comments | 3,879 views

Repairing a Disagreement with your Beloved & “Physical” vs. “Social” Distancing
By Chandrama Anderson | 2 comments | 2,580 views

The University of California’s flexible policies during COVID-19
By John Raftrey and Lori McCormick | 6 comments | 2,579 views