After getting a new heart, 16-year-old is giving back — with a heart-healthy cookbook | News | Palo Alto Online |

After getting a new heart, 16-year-old is giving back — with a heart-healthy cookbook 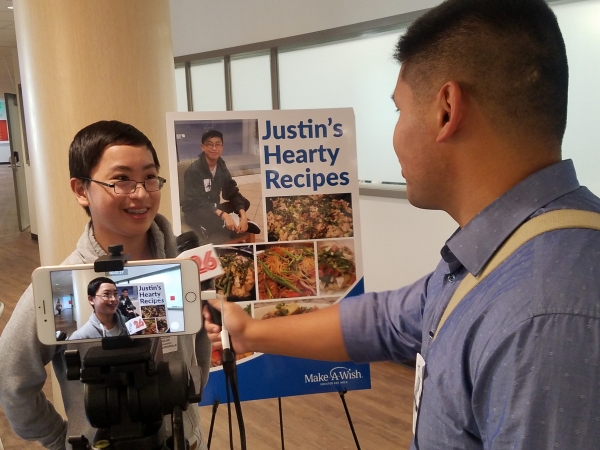 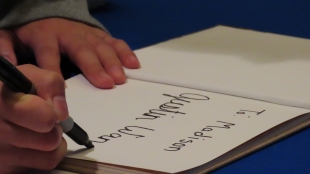 Justin Wang, a 16-year-old heart transplant recipient, signs his name in one of his new cookbooks, "Justin's Hearty Recipes," during his book launch at the Ronald McDonald House at Stanford on April 30. Photo by Christian Trujano/PaloAltoOnline.com

On April 30, 16-year-old Justin Wang brought hope in the form of a healthy cookbook to patients and friends at the Ronald McDonald House at Stanford, where he lived for three months last year after receiving a heart transplant.

Wang, diagnosed with a rare blood disorder at the age of 2, had been suffering from chronic heart failure. He had a heart transplant on April 27, 2018, at Stanford Hospital and spent the summer recovering at the Ronald McDonald House. There, he enjoyed cooking, a hobby he had picked up years earlier from his first-grade tutor.

When he first learned that he qualified for a wish through the nonprofit Make-A-Wish Greater Bay Area, he said he didn't know what to do — then, he landed on the cookbook idea.

For much of Wang's life, he'd had a diminished appetite because of his ailing heart, but after receiving a new heart, he now "has a yearning for delicious food," he told Make-A-Wish. This newfound hunger, coupled with his desire to stay healthy, led him to make his request: "to work with a professional chef to create a recipe book of healthy meals."

"I have three main goals of this cookbook; be healthy, be convenient and taste good," said Wang, who is currently a sophomore at Foothill High School in Pleasanton.

With representatives of the media and various organizations surrounding him, he said he enjoyed his "15 minutes of fame," even though he didn't plan for the book to be such a huge deal.

Lacuesta said that at first she couldn't believe she was being chosen to help with the book.

But after getting the emails from Make-A-Wish Greater Bay Area, meeting the Wang family at their house and deciding to try something new, she was excited for the opportunity.

"I'm not expecting anything big, as in huge publicity; I just want to help people," Lacuesta said.

Betsy Biern, CEO of Make-A-Wish Greater Bay Area, said that as a mom and a cook, she loved Wang's wish and how he did it not only for himself but also for others like him.

Ronald McDonald House Charities Bay Area CEO Annette Eros said she found it moving and inspiring that Wang came back to share his experience with patients.

"Both of our organizations are about inspiration, hope and bringing happiness to families that are in crisis, and so this is one of the ways we've done work together, but this type of thing has been going on for a really long time," she said of the partnership between Ronald McDonald House and Make-A-Wish.

Wang said he considered his recovery at the house as both his best and his worst time.

"It wasn't great staying here, but it was awesome staying here," he said, explaining that while he didn't like that everyone was sick, he appreciated the friendly and supportive environment.

He said he feels like he brought hope to the house.

"People needed hope here the most; the people here are suffering the most," he said.

April Bristow and her son Kayano, who recently received a kidney transplant, were Wang's first neighbors at the house last year.

Bristow recollected how welcoming Justin was and how she always saw him cooking during their months at the house.

"It's like a big family, very warm, and it's unique in that we are all going through something similar," she said.

Wang's parents said they've been moved by all the work the organizations have done for their son and are grateful to everyone who helped him, especially the family who donated his new heart.

"It's a big stone lifted from us," said Wang's dad, Lin Wang, adding that his son is much healthier now.

With the first year over, Wang's mom, Yang Wei, said she doesn't know what the future holds but that she will always support Justin.

"Transplants are not the solution; it's an extension of life," Wei said. "It's like we're in the process of uncharted territory, so during this journey we're doing it one step at a time."

In the past year, Wang said, he started exercising and playing sports, something completely new for him.

"I think Justin is a living, breathing example of the successes of organ transplant," she said.

But Koubek also said many other people still need hearts and that more can be done to save people's lives.

"Be an organ donor," Wang said. "When the inevitable comes, an organ donation will continue your legacy even after death."

"And an inconvenience of 15 minutes (to sign up) can save a life — multiple lives actually."

Congratulations, Justin! What a wonderful idea and accomplishment! Best wishes for a good and healthy life.

(Can I get the book with Kindle son I have it on hand all the time?)

Weekly,
Please include a link for those of us who want to buy the cookbook! I see lots of local coverage but not the info to buy it.

Congratulations Justin! I'm so proud of you and am inspired by you! I love to see your big smile, thank you Justin!
-Love
Ying (Yang's college friend)

A Pragmatic Approach to A Trillion Trees
By Sherry Listgarten | 1 comment | 3,059 views

Repairing a Disagreement with your Beloved & “Physical” vs. “Social” Distancing
By Chandrama Anderson | 1 comment | 1,789 views