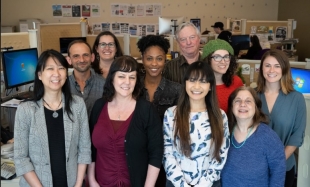 The Palo Alto Weekly was named the best large weekly newspaper in the state in the California Journalism Awards competition on Saturday, May 4, in Long Beach. The honor, presented by the California News Publishers Association, was one of a raft of awards for the community media outlet.

For the first time in the contest's history, the Weekly's digital work, published primarily on PaloAltoOnline.com, competed against that of metropolitan dailies and other news outlets whose websites receive more than 200,000 unique visitors a month — sites that include the San Francisco Chronicle, Los Angeles Times and others.

The Palo Alto Weekly was one of few weekly papers in the contest to compete on that level, receiving six awards for works that placed in the top five of their categories.

In the contest's print categories, the Weekly, which employs a newsroom staff of 11 journalists under Editor-in-Chief Jocelyn Dong, went toe-to-toe with other weekly newspapers with print circulations of more than 25,000.

Journalists from states outside of California selected the winners of the annual competition from among daily, weekly and school newspapers out of thousands of entries. The contest covered work done in 2018.

Among the judges' comments on the staff’s work: "The finest example of humanizing a broader issue among many great entries attempting to do so"; "Good in depth coverage of an obviously very difficult breaking news story"; "Thorough, and well-written"; "The presentation of this investigation is particularly impressive. The sidebars effectively gives weight to the side issues and helps guide the reader to better understand the issues and consequences."

This year's awards in the digital division were for:

This year's awards in the print division were for:

The Weekly's sister papers on the Midpeninsula also took home honors Saturday: The Mountain View Voice won 23 awards in the digital and print divisions, and the Almanac received 12 print awards. In the East Bay, the Pleasanton Weekly garnered seven awards.

Founded in 1979 by Bill Johnson and a group of investors, the Palo Alto Weekly produces a Friday print edition; a daily e-edition, Express; and the news and community website PaloAltoOnline.com, which hosts Town Square, the online discussion forum, among other features. PaloAltoOnline.com can also be accessed through the iPhone and Android apps, "Palo Alto." The Weekly's social-media sites include Twitter.com/paloaltoweekly, Facebook.com/paloaltoonline and Instagram/paloaltoonline.

The Weekly's parent company is Embarcadero Media, which is funded by advertising revenue and by readers' subscriptions. Information about subscriptions is posted at PaloAltoOnline.com/subscribe.

The California News Publishers Association is a nonprofit trade association for more than 800 publications. Founded in 1888, it represents daily and weekly newspapers and news websites throughout California.

Resident8 is a registered user.

Fred Balin is a registered user.

Report Objectionable Content
Email Town Square Moderator
4 people like this
Posted by Poverty
a resident of Addison School
on May 5, 2019 at 4:38 pm

Report Objectionable Content
Email Town Square Moderator
8 people like this
Posted by Congratulations!
a resident of Fairmeadow
on May 6, 2019 at 10:22 am

Congratulations! is a registered user.


Fantastic news, and congratulations!! Great to hear that the digital versions are attracting so much readership, and that the high-quality work of the surprisingly small and very dedicated and talented staff is being recognized. We are so fortunate as a community to have this paper.

Report Objectionable Content
Email Town Square Moderator
8 people like this
Posted by Linda
a resident of Barron Park School
on May 6, 2019 at 11:01 am

Linda is a registered user.


Congratulations for your hard work! Keep investigating those hard issues so our community keeps informed!

Report Objectionable Content
Email Town Square Moderator
2 people like this
Posted by Cover-up Culture
a resident of Community Center
on May 9, 2019 at 9:12 am

Congratulations. However, why is it that this esteemed publication chooses to ignore corruption in its own backyard - cover ups, short changing of students, and abuse of power in the school district, for example? Is this due to its desire to be a power broker rather than to be an honest broker?

Report Objectionable Content
Email Town Square Moderator
2 people like this
Posted by Cover-up Culture
a resident of Community Center
on May 9, 2019 at 9:20 am

Congratulations again. Why is it when Trump obfuscates and stonewalls and lies and covers up and intimidates people and flouts the law and abuses his power, it is terrible, but it's not when those in our community do it?

Awesome, Veronica!
I'm so proud to know this dedicated group of journalists in our town.
Congratulations!

A Pragmatic Approach to A Trillion Trees
By Sherry Listgarten | 4 comments | 3,884 views

Repairing a Disagreement with your Beloved & “Physical” vs. “Social” Distancing
By Chandrama Anderson | 2 comments | 2,586 views

The University of California’s flexible policies during COVID-19
By John Raftrey and Lori McCormick | 6 comments | 2,584 views