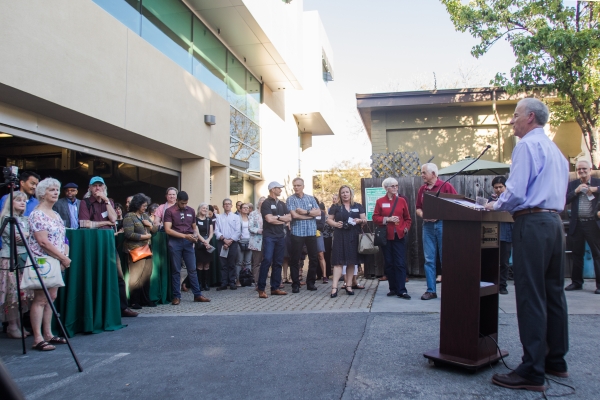 Palo Alto Weekly Publisher Bill Johnson discusses the diverse recipients of the 2019 Holiday Fund at a reception on April 22, 2019. Photo by Veronica Weber. 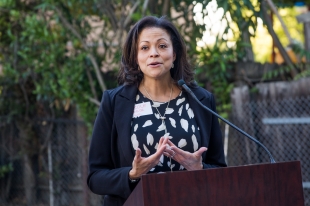 The Palo Alto Weekly Holiday Fund campaign exceeded expectations this year by raising $411,000 for local nonprofits, the largest amount in its 26-year history.

The donations from community members were distributed to 57 nonprofit organizations serving families and children in Palo Alto, East Palo Alto and the surrounding area. The fund has now distributed a total of $7.2 million since launching in 1993.

"We are just passing along funds that our community members want to give to support the good work that you (organizations) all do," Weekly Publisher Bill Johnson told representatives at the nonprofits, who gathered with donors Monday night for a reception.

This year's major donors included the Hewlett and Packard foundations, which gave $25,000 each; the Peery and Arrillaga foundations, which contributed $10,000 each; and an anonymous family that donated $25,000. Another family has donated $100,000 a year for the last eight years, according to Johnson.

More than 300 individual donors contributed to the campaign, which ran from mid-November to the beginning of January.

Johnson said the donations he loves the most, however, are the $25 to $100 dollar donations.

"It just represents the diversity, the community and everybody trying to do their share to the extent they can," he said.

Checks in amounts ranging from $3,000 to $20,000 were given out to organization representatives at the end of the reception held at the Palo Alto Weekly's headquarters.

The Holiday Fund grant committee, which selected the nonprofit recipients, is made up of Weekly employees and former employees who reviewed about 100 applications from programs.

Those applications were reduced to about 70, and after a preliminary review, committee members went on site visits to assess new nonprofits as well as old ones that had not been reviewed in a while.

The organization currently serves up to 65 middle school students and is made up of about 100 volunteers, according to Johnson.

"Our goal is to make sure that students truly feel, as well as families, that there is somebody that truly cares about them, that they are a part of a valued community and they actually can do this with just a little bit of help," said Miguel Fittoria, program director of DreamCatchers.

Michael Patrick, board president of senior meal program La Comida, accepted $7,500 for the support of the newly opened downtown location for the senior lunch program.

La Comida provides sit-down food services to senior citizens to enforce the idea of creating a community through hospitality. The nonprofit has never raised funds, but the organization's leaders felt it was time to expand and serve more people, which means spending more money, Patrick said.

PACCC has previously benefited with the support of a spectrum of projects from upgrading playgrounds, to supporting educators and underprivileged children, said Rock.

This year, the organization is building a "one of a kind" garden with plant observing stations and reading areas for kids to use, Rock said.

Nicole Taylor was also introduced as the new president and CEO of Silicon Valley Community Foundation, a longtime partner in the Holiday Fund.

She recently went on a listening tour for her first 100 days for strategic planning to rebuild and move the organization forward following a series of workplace harassment and bullying scandals, she said.

Taylor said the reception was a great place to see all the dedicated people doing important community work and their supporters coming together.

"It gives me hope," she said, "in a time when it's hard to find hope sometimes."

Curt Weil, a longtime Palo Alto resident and donor for many years, said he is grateful for the Holiday Fund. He trusts that his money will be going to organizations he feels really make change happen.

"That's all any donor can ask for is that their contribution be well-used," Weil said.

A description of the funded programs and a list of this year's Holiday Fund donors are posted at PaloAltoOnline.com/holiday_fund.

Watch a video from the event on our Facebook page.


What wonderful news! So glad to hear these worthy organizations will benefit.

Nice humanitarian gesture but...if this fund is like the Red Cross or United Way + other non-profits:


Editor's Note: 100% of the funds raised through the Holiday Fund are distributed to the various non-profits receiving grants. The Palo Alto Weekly absorbs all the costs of the program, the advertising promoting it and the reception. All grant recipients provide financial statements with their applications and submit reports on the program funded.


@Doing the Math. On what facts do you base your speculation that the Weekly Holiday Fund is going to give the recipients who were awarded grants 10%? Boy, there sure are a lot of cranks commenting on Palo Alto Online!

Report Objectionable Content
Email Town Square Moderator
21 people like this
Posted by Donate now
a resident of another community
on Apr 23, 2019 at 5:51 pm

Report Objectionable Content
Email Town Square Moderator
20 people like this
Posted by Doing The Math
a resident of Leland Manor/Garland Drive
on Apr 23, 2019 at 6:02 pm

>> On what facts do you base your speculation that the Weekly Holiday Fund is going to give the recipients who were awarded grants 10%?

I am not indicting the PA Weekly but rather once the money is dispersed to various agencies & charities, you have no idea of how it is actually being managed.

Annies biped is a registered user.


How sad to paint our local not for profit organizations as profligate spenders on executive salaries. To suggest that there is no indication of how the grants are used once given is a demonstration of intellectual laziness. Most, if not all, of these organizations could provide financial statements that would show clearly where donations/grants are used. All one needs to do is ask. In some cases, the Y's for example, there are annual reports available to the public which clearly show how their funds are used. Thanks to the Palo Alto Weekly for helping our local non profits serve our community! We all benefit from their generosity.

Report Objectionable Content
Email Town Square Moderator
2 people like this
Posted by Food Donations Are Misleading As Well
a resident of Adobe-Meadow
on Apr 25, 2019 at 1:17 pm

What bugs me is during the holiday season, grocery stores have these huge bins where they ask people to drop off canned goods for the needy.

I'm OK with that but first you have to buy the canned goods and then the store claims credit for the donation. Since they've already profiteered off the retail sale, more credit should go to those who donated the food rather than the grocery store itself.


Report Objectionable Content
Email Town Square Moderator
8 people like this
Posted by Charity Begins At Home
a resident of Midtown
on Apr 25, 2019 at 3:06 pm

>> first you have to buy the canned goods and then the store claims credit for the donation.

Agreeing. Why don't the grocery stores simply donate the food directly to the various charities?

Instead the profiteer of the sale & then as you said, get all the credit for the donation. That's not right.

One must use discretion when making a donation these days.

Look at the Clinton Foundation & how they channel the resources.

You know what is amusing about types like you? You like complaining about everything...but don't actually anything yourselves.

Which explains the shot at the Clinton Foundation (never mind, of course, that the Trump Foundation was forced to dissolve by way of court order)...

The first few seconds after awakening; before I remember the virus
By Chandrama Anderson | 0 comments | 3,548 views

Can you stay healthy without making more trash?
By Sherry Listgarten | 6 comments | 2,949 views

Think about helping others in our coronavirus-affected area
By Diana Diamond | 7 comments | 2,689 views