SEIU employees would see salary increases of 10% over three-year period, with some utility workers getting extra 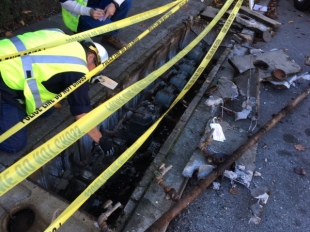 On April 22, 2019, the Palo Alto City Council is set to approve a new three-year contract with Service Employees International Union, Local 521, which includes raises as high as 20% for city utilities staff. Photo by Veronica Weber.


Almost daily there is a news item that makes it glaringly clear that we need a moratorium on commercial development and a housing development program for people with community serving jobs. And yet we never read stories about the creation of new job centers or fully housing-mitigated development. On the contrary, we read about mega commercial development plans in the pipeline that are blatantly short on housing. If you will pardon an unpleasant analogy, this is like a person with lung cancer smoking a pack a day: the inevitable result cannot be good.

In today's paper alone we have this story about staffing (an infrastructure issue), the cell tower (also infrastructure) story, the SFO pothole (again, infrastructure) story that delayed 218 flights, and the news article about 28,000 homeless in the region. Are our elected officials and other decision makers so enamored of developer $ that they are impervious to the very real, very serious, possibly insurmountable problems that the unsustainable job creation is visiting on this city and the region generally?

The City’s budget is clearly on auto-pilot. This can be clearly seen in the City’s yearly Long-Range-Financial-Forecast. No one on the City Council has any idea about how big these future expenditures for labor will be, or what the implications of these yearly, almost guaranteed pay increases will cause future residents because of the linked pension obligations. Sadly, no one on the Council ever asks about linked pension obligations.

The cost of labor for City services has grown quickly over the past few years. Using the City’s own data, the average per employee cost was about $148K in 2014. The 2019 per employee costs jumped to about $205K. This is a $57K increase in just six years. The 2020 per employee costs will likely jump by another $6K-10K. These increases will go on forever—unless somehow capped. Moreover, the City uses a geometric (non-linear) multiplier to determine pay increases. This is the same formula used by banks when computer interest. So, the taxpayers can expect to see bigger salary increases for City employees in the future.

Using the 2017 data which the City provided TransparentCalifornia, the following data about SEIU unit costs was obtained:

Looking forward just twenty years, the City will be paying the following for SEIU labor:

And the costs continue growing geometrically into the years beyond 2038.

When salary increases are awarded, the UAL (Unfunded Actuarial Liability) goes up. It currently is over $400M. As the costs of labor go up, the UAL is increased. The article indicates that SEIU employees will be required to contribute 1% of their salaries to help pay for their future pension payouts—which could be as much as 82% of their exit salaries, providing they were hired prior to 2013. Government agencies will see lowered pension costs sometime after 2033 because of the PEPRA law. However, the salaries will continue to increase—and the pension payouts will grow to the PEPRA limits, which will likely be about $188K by 2038.

Needless to say, this issue of pensions is raging throughout the country. Palo Alto is no different for other government agencies, although it does not seem to have done very much to provide the public all of the pension-related data that is needed to fully model our full post-retirement obligations for public employees (which includes healthcare costs also).

All of these increased labor costs will ultimately result in higher fees/fines/utility costs—which will not map into actual service increases, or anything that will look like increasing the quality of life for Palo Altans.

9 people like this
Posted by The Public Interest
a resident of Charleston Gardens
on Apr 12, 2019 at 5:55 pm

Didn't Eric Filseth say Palo Alto's pension liability was $900 million? How can the city afford these kinds of raises?

Report Objectionable Content
Email Town Square Moderator
7 people like this
Posted by Palo Alto Is Not For Tea Party Indians
a resident of Community Center
on Apr 12, 2019 at 6:19 pm

> Didn't Eric Filseth say Palo Alto's pension liability was $900 million? How can the city afford these kinds of raises?

To Mr. Martn is a registered user.

Instead of just criticizing, what feasible solution can you offer to this complex problem?

Don’t get fooled again by Entwistle.

Report Objectionable Content
Email Town Square Moderator
45 people like this
Posted by Baba O'Reilly
a resident of College Terrace
on Apr 22, 2019 at 9:03 am

> Don’t get fooled again by Entwistle.

Uh...did you mean 'Won't Get Fooled Again' by Pete Townsend of The Who from the 'Who's Next' album?

Are you a Millennial? I find they often like to quote things they think they've read somewhere.

Or were you referring to an obscure Palo Alto resident/local politician named Entwistle?

Report Objectionable Content
Email Town Square Moderator
35 people like this
Posted by Parker Leahy
a resident of Leland Manor/Garland Drive
on Apr 22, 2019 at 11:46 am

Parker Leahy is a registered user.


"Don’t get fooled again by Entwistle."

John Entwistle wrote "My Wife" on that particular album.

Mr. Weiss is obviously not a rock musicologist.

Report Objectionable Content
Email Town Square Moderator
25 people like this
Posted by Don't Get Fooled...AGAIN
a resident of Downtown North
on Apr 22, 2019 at 5:21 pm

Roughly 500,000 attendees were at Woodstock in 1969 yet over 1 million people have memories of actually being there.

And in Palo Alto alone, hundreds claim to have taken guitar lessons from Jerry Garcia at the Dana Morgan & Son music store in 1963.

Ludicrous embellishments are apparently a part of being a bonafide Palo Altan...as in yesterday and today.

Flying: How much is enough? It's personal.
By Sherry Listgarten | 5 comments | 1,502 views