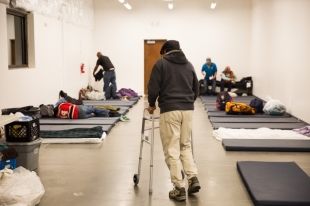 The North County Winter Shelter in Sunnyvale operated by HomeFirst provides about 100 beds to give the homeless a place to stay during inclement weather. Photo taken in 2016 by Michelle Le.


So shameful... so much greed.


And still, locally, there's no serious effort to have a moratorium on commercial development. It is unconscionable that cities continue to approve massive developments such as those recently described in the article about mega projects in the pipeline. It is equally wrong to expect communities to accept the provisions of a bill such as Weiner's SB50 when the purported desired goal is unachievable w/o stopping that which is generating the demand side of the equation. Expecting that is akin to saying "change your community irrevocably, place further demands on your already inadequate infrastructure, and overlook both the glaring reality that the housing imbalance problem will not be impacted in any positive way and oh, yeah, all the newly homeless and housing insecure."

Let's not lose sight of the important thing here: billionaires and corporations just got trillions in tax cuts. That's exploding the deficit, and those same interests will claim we then need to cut services (in fact, they've already started.)

Gotta have priorities, from the top down.

Report Objectionable Content
Email Town Square Moderator
2 people like this
Posted by RV Dweller
a resident of Another Palo Alto neighborhood
on Apr 11, 2019 at 1:31 pm

> ...billionaires and corporations just got trillions in tax cuts.

Which is why we represent the last of the humble Palo Altans.

Most others have lost sight of reality.

Report Objectionable Content
Email Town Square Moderator
11 people like this
Posted by We know why
a resident of Duveneck/St. Francis
on Apr 11, 2019 at 5:18 pm

We know why -
They MOVE here from all over!
This region is a magnet for those who (often) prefer to live unhoused.
There are enough services devoted to this to attract out of state folks.

Report Objectionable Content
Email Town Square Moderator
6 people like this
Posted by Sanctimonious City
a resident of Barron Park
on Apr 11, 2019 at 5:44 pm

No. It is alive with newcomers from all over, some wealthy & some indigent.

To say it is 'dying' is a tad harsh as those with money will carry on with their varied lifestyles while those who aren't will somehow manage to get by... whether parking their RVs & settling in, panhandling & recycling or working at a menial job and trying to get by in today's inflated consumer economy.

Palo Altans represent a diverse community of survivors & while it is certainly easier to get by with lots of money, we must never lose sight of those getting by with far less as anyone can become homeless.

Report Objectionable Content
Email Town Square Moderator
2 people like this
Posted by george drysdale
a resident of Professorville
on Apr 17, 2019 at 9:45 am

Again, look at the numbers. America's "poor" have a standard of living that is better than around 75& of the world. 'Homeless" are only a tiny percentage of the total population. Nobody is starving or dying of exposure unless they are mentally ill or addicted. Illegal immigrants who can stay in the U.S.A. hit the jack pot. Virtually none of whom will pay enough taxes to offset their expense and generation after generation of tax eaters. It's a very difficult to compete in the USA with it's well educated English speaking population. This is all up on the internet. Forget news headlines. Resources are scarce.


Report Objectionable Content
Email Town Square Moderator
2 people like this
Posted by snark
a resident of Meadow Park
on Apr 17, 2019 at 10:11 am

Meme central. But hey, it's "all up on the internet".

Report Objectionable Content
Email Town Square Moderator
6 people like this
Posted by Palo Alto's New Diversity
a resident of Duveneck/St. Francis
on Apr 17, 2019 at 10:20 am

> America's "poor" have a standard of living that is better than around 75& of the world.

Regardless of the numbers, it still costs more to live in America than in some 3rd world country. Everyday living expenses are far higher.


> 'Homeless" are only a tiny percentage of the total population.

But a % that cannot be ignored. Unless it is a preferred lifestyle (i.e. Woody Guthrie way of life), the economically-challenged should get a break...at the expense of the wealthy.


> Illegal immigrants who can stay in the U.S.A. hit the jack pot.

Then why do so many play 'scratchers'? Possible answer below...


> Virtually none of whom will pay enough taxes to offset their expense and generation after generation of tax eaters.

Many immigrants are working here illegally with fake IDs and withholding deductions are still being taken out of their gross pay. Some will never qualify for SSI or Medi-Care due to lack of proper identification.

As a result, certain entitlement programs serve as an added safety net until a lucky CA scratcher paves their road to the American Dream.

People come to America for a reason...it is still a land of dreams or pipedreams.

Report Objectionable Content
Email Town Square Moderator
2 people like this
Posted by Anon
a resident of Another Palo Alto neighborhood
on Apr 17, 2019 at 10:49 am

Posted by george drysdale, a resident of Professorville

>> Nobody is starving or dying of exposure unless they are mentally ill or addicted.

Well, George, now I feel a lot better. Perhaps the mentally ill and addicted can be used as a food source? {that's irony for the impaired}. Why do I find myself being reminded of Swift's "A Modest Proposal" so often these days? Web Link

"I profess, in the sincerity of my heart, that I have not the least personal interest in endeavoring to promote this necessary work, having no other motive than the public good of my country, by advancing our trade, providing for infants, relieving the poor, and giving some pleasure to the rich. I have no children by which I can propose to get a single penny; the youngest being nine years old, and my wife past child-bearing."

Report Objectionable Content
Email Town Square Moderator
10 people like this
Posted by Blame The Excessively Rich
a resident of Evergreen Park
on Apr 17, 2019 at 1:54 pm

Part of the problem is that America has become far too urbanized/sub-urbanized.

If one lived on a farm (even as a sharecropper), there's is always something to eat whether it be crops grown and/or animals raised, caught or shot.

One cannot do that in Palo Alto & other communities. You have to go to a grocery store (which is why the poor have food stamps). Shelter is no longer a small farmhouse or even a weathered barn...thus the poor require housing/rental subsidies for shelter.

The wealthy don't understand this because nearly everything comes their way...oftentimes via the minimal of physical effort. Thus many of them have a shallow perspective of everyday life issues and problems....other than their own self-serving frustrations.

Fortunately the USA has the middle-class as a buffer to prevent a full-blown social revolution. The middle class pays the bulk of the taxes, much of which go into entitlement programs for the poor.

The French & Russian revolutions took place because there was no middle class of consequence...just the haves & have nots.

This what makes America a unique country...the rich can continue being atypical a-holes with their massive tax breaks while the poor are provided just the minimal in subsistence benefits. The American middle class is the backbone of the country & when they start feeling shafted, you end up with a POTUS like #45 who ironically represents the wealthy interests but has the support of both the conservative wealthy & the working poor.

The liberal wealthy don't even enter into the picture because they too have their own self-serving agenda & merely work the poor for votes. Their world is also high & mighty with various social avenues closed as well.

Flying: How to lower your impact
By Sherry Listgarten | 10 comments | 2,187 views