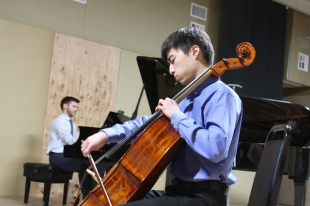 Davis You plays "II. Scherzo from the Sonata for Cello and Piano in G minor, Op. 65" by Frédéric Chopin for an episode of NPR's "From the Top" available through the podcast version of the show on April 8, 2019. Image Courtesy "From the Top."