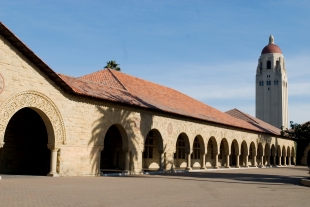 Stanford University's Athletics Department has created a new protocol to have more oversight over recruits recommended by coaches, one of the university's many plans in response to the college admissions scam. Weekly file photo.

In the wake of a nationwide college-admissions bribery scheme that implicated its head sailing coach and a current student, Stanford University plans to more closely scrutinize its admissions, gifts and athletic-recruitment processes.

Stanford announced on Thursday that it will launch a "comprehensive external review" of its process for admissions recommendations from the athletics department as well as how gifts to athletic programs are accepted.

A total of $770,000 was contributed by a fraudulent foundation to the sailing program in the form of three separate gifts, according to the university. Sailing coach John Vandemoer, whom Stanford quickly terminated last week after a federal indictment was announced, has pleaded guilty to a charge of information with racketeering conspiracy.

Responding to allegations that parents fabricated applicants' athletic achievements to gain admission, Stanford Athletics has already created a new protocol to have more oversight over recruits recommended by coaches: a member of the executive leadership of the athletics department responsible for each of Stanford's 36 varsity men's and women's sports will review and confirm the athletic credentials of all recruits.

"This will provide a second, higher-level verification of the athletic credentials of recruited student-athletes before that information is shared with the admission office, to be considered as one factor in a comprehensive review of each student's qualifications for Stanford admission," President Marc Tessier-Lavigne and Provost Persis Drell wrote in a blog post.

The university will also review the applications of all student-recruits who applied for admission for this fall. The university has not found evidence to date of any person in this year's applicant pool who falsified their athletic credentials, Tessier-Lavigne and Drell said.

Stanford has confirmed all students on the sailing team who received an athletic recommendation, dating back to 2011, had legitimate sailing experience before applying.

No students in this year's applicant pool are associated with a donation from The Key Worldwide Foundation, the fraudulent nonprofit through which college adviser William "Rick" Singer channeled bribes to athletic coaches and administrators. The university received no other contributions than were reported in a federal indictment.

There is a current Stanford student, however, who is connected to a contribution The Key foundation made several months after he or she was admitted, the university has said. The student did not have a recommendation from the former sailing coach or any other coach and has not at any time been on the Stanford sailing team or any other athletics team.

"We are continuing to work to verify the circumstances around this student and will take whatever actions are appropriate," the president and provost wrote, noting that "as has long been our practice, we rescind a student's admission to Stanford if we determine the student submitted false information."

Stanford is also figuring out what to do with the funds given to the sailing program and is in touch with the California Attorney General's office, which has responsibility for overseeing foundations, for assistance, Tessier-Lavigne and Drell said.

Due to an unrelated criminal case involving a Stanford admission officer who was arrested earlier this month for alleged attempted murder, domestic violence and assault with a deadly weapon, the university is also reviewing applications that were assigned to him "to ensure his assessments were sound," they said.

Tessier-Lavigne and Drell acknowledged that the scandal has "jarred the trust of many Americans in the college admissions process, and it has prompted many questions from the Stanford community.

"We are determined to take the right steps at Stanford to ensure the integrity of our process and to work toward rebuilding that trust," they wrote.

• Listen to the March 15 episode of "Behind the Headlines," where Palo Alto college adviser John Raftrey discusses the implications of the nationwide admissions bribery scandal, now available on our YouTube channel and podcast.

• Guest Opinion: Lessons parents should learn from the college-admissions scandal

• Pressure over college admissions 'out of control'

• Editorial: The audacity of privilege

Although I applaud Tessier-Lavigne for handling this matter head-on, the letter is rather vague about what Stanford will do wrt the current student whose parents made a donation through the now-suspect Key Foundation. Many important questions remain. Is there any evidence that this student worked with Singer's proctor to increase his/her SAT scores? Have the student's parents made additional financial donations? Has the student's performance indicated deficits that were masked by significant help wrt grades and/or application essay by Singer's group?

35 people like this
Posted by My Alternative To Stanford
a resident of another community
on Mar 22, 2019 at 8:19 am

I applied to Stanford as a two-year transfer out of junior college. My application was denied 'due to the high numbers of applications we receive'. I was also 'wished success in my future endeavors' & that was that.

Incidentally, I am a former Sea Scout with a Quartermaster Award..the highest rank attainable & far more difficult to achieve than an Eagle Scout Award in Boy Scouts.

I have also participated in the America's Cup & co-captained private yaughts to Tahiti & Mexico.

Though I was not applying for a sailing scholarship, I listed my achievemnts in this area & my application was rejected nevertheless. It is appalling that someone who has never sailed can qualify for a scholarship in this field at Stanford.

Perhaps it was because I am 1/2 African-American & my parents could not afford to donate money & have a building named after the family. Then again, why would Stanford University name a building after ancestors of slaves?

In retrospect, I am glad that my application was denied given the poseurs they consider for admittance. Stanford University is 'all for show' & a certain sense of arrogance.

Incidentally, I wound up at the US Coast Guard Academy & my letters of recommendation for admittance incuded two US Congressmmen & a United States Senator.

I did not have to pull any Hollywood stunts or bribe my way in.

PS.. I always root for Stanford to lose in collegiate sports!

27 people like this
Posted by Scrutinize Foreign Appllicants As Well
a resident of Adobe-Meadow
on Mar 22, 2019 at 3:12 pm

Stanford should also investigate potential cheating by foreign students applying to the university both as undergraduates & graduate school candidates.

Though an international university, Stanford admission priorities should be focused qualified American students first & foremost with secondary or tertiary consideration given to foreign students as they have their own universities in their own countries & some are even quite reputable.

About the only exception might be avoiding having to enter the University of Grenada Medical School where I understand you can even gain entrance with a 2.0 GPA & a questionable MCAT score...though entrance is more popular among American college students who majored in Spring Break.


Report Objectionable Content
Email Town Square Moderator
12 people like this
Posted by Former Navy Corpman
a resident of another community
on Mar 22, 2019 at 6:26 pm

> About the only exception might be avoiding having to enter the University of Grenada Medical School where I understand you can even gain entrance with a 2.0 GPA & a questionable MCAT score.

Scary thought...a Grenada-educated MD. I've been to Grenada (during the 1983 US military intervention) & many of the labs were Quonset huts & US born med students were performing dissection of cadavers in flip-flops & T-shirts.

About the only thing missing was a tub of ice filled with beer. Not sure where their grads go on to actually practice medicine.

I'd trust a Cub Scout with a box of band-aids before I'd seek these individuals out for medical treatment.

Report Objectionable Content
Email Town Square Moderator
2 people like this
Posted by zap
a resident of Another Palo Alto neighborhood
on Mar 22, 2019 at 8:21 pm

Can we really take this seriously? They got caught up in a scandal so they need to do a little window dressing. This is the school that has the list of "easy" classes that only athletes are allowed to view

Report Objectionable Content
Email Town Square Moderator
7 people like this
Posted by Seriously
a resident of Old Palo Alto
on Mar 23, 2019 at 12:56 pm

In other words, Stanford is furious that people have been bribing the sports stafff, rather than bribing the university directly. It’s an outrage that other people are getting in on the scam.

Report Objectionable Content
Email Town Square Moderator
Like this comment
Posted by No Room At The Inn
a resident of Barron Park
on Mar 23, 2019 at 4:16 pm

Report Objectionable Content
Email Town Square Moderator
8 people like this
Posted by Lest we forget
a resident of Adobe-Meadow
on Mar 23, 2019 at 10:53 pm

Stanford is a private institution not a public one. Everyone seems to think they are entitled to attend if they are qualified, but there are many many qualified kids who apply and it is really stanford’s prerogative to decide who gets to attend. Also remember that someone has to pay for the kids who go free. People forget this is a business they are running.

@ my alternative to Stanford: my own children applied and were not accepted albeit with perfect GPAs and 99percentile test scores in the sat and subject tests, and they were nationally ranked athletes. They are not African American and did not qualify for financial aid. They are at public universities where ithere is more of a meritocracy.

Don’t carry the chip, put this behind you and get on with life. It’s a waste of energy to hate on Stanford for not admitting you. It was always a lottery. Good luck to you with the coast guard and the future that lies ahead of you!


Report Objectionable Content
Email Town Square Moderator
1 person likes this
Posted by Parent Who Resisted
a resident of South of Midtown
on Mar 26, 2019 at 5:53 pm

Yes, Stanford is a private institution and it can admit who ever it likes. However, it also claims to be a very selective university, while many less accomplished undergrad admits have circumvented the ostensibly rigorous application process because they are legacy or donor family members.

If Stanford were not using the claim that their standards are so high to encourage so many applicants to apply, these not all that high standards would lower the status of their brand.

As a parent, I observed representatives of Stanford brag, and lie about this, while criticizing parents for the misguided belief that hard work and brains are the requirements, rather than a big check.

They need to stop lying. It is harming our children.

A Pragmatic Approach to A Trillion Trees
By Sherry Listgarten | 1 comment | 2,921 views

The University of California’s flexible policies during COVID-19
By John Raftrey and Lori McCormick | 6 comments | 2,119 views

Repairing a Disagreement with your Beloved & “Physical” vs. “Social” Distancing
By Chandrama Anderson | 0 comments | 1,666 views