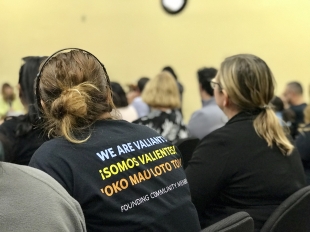 A KIPP East Palo Alto parent, left, and Principal Kate Belden, right, listen to a KIPP seventh-grader urge the Ravenswood school board against splitting her school across two locations on March 14, 2019. Photo by Elena Kadvany.

The Ravenswood City School District and KIPP Valiant Community Prep have agreed to examine a new proposal for how to accommodate the growing charter school next year: providing additional space at its current site rather than splitting it across two campuses.

The district and charter are in the midst of negotiating a facilities agreement for the next school year, when KIPP plans to grow by 150 additional students to a total of 550 students. The school board agreed in February to preliminarily offer KIPP shared space at Ravenswood Middle School — a proposal opposed by KIPP as well as staff at the new comprehensive middle school. KIPP is currently housed in 18 rooms at the adjacent Brentwood Academy and Los Robles/Ronald McNair Academy sites.

KIPP sent its counter proposal to the district this week, arguing that splitting the school across two sites is "not consistent" with the district's obligations under state Proposition 39, which requires school districts to make equitable and contiguous facilities available to charter schools.

Instead, KIPP has asked the district to provide seven additional classrooms at its current location, which the charter believes could be made available with minimal impact to the district's programs.

"We evaluated the number of classrooms available at the site, and our counter-proposal is an equitable split between KIPP and the district based on our respective enrollment figures for next year," Adam Kaye, director of real estate for KIPP Bay Area Public Schools, wrote in a March 11 letter to acting Superintendent Gina Sudaria. "Our proposal also minimizes disruption for the district ... and avoids the disruption to Ravenswood Middle School by moving us onto that campus."

KIPP currently pays Ravenswood 3 percent of the charter school's total state revenue: 1 percent for an oversight fee and 2 percent for a facility fee. Last school year, this totaled $64,651, according to KIPP. The school expects to pay about $120,000 this year due to its enrollment increase.

KIPP families and staff packed the school board meeting on Thursday evening to urge the trustees to work with the charter school to keep all students in one location. Working parents and those with both elementary- and middle school-aged children said a split campus would create difficult logistical challenges. Staff worried how it could affect school climate and their capacity, if splitting their time between two sites, to support special-education students.

Sudaria recommended to the board that the district work with KIPP to pursue the charter's counteroffer, which she said she had reviewed with the district's chief business official and the principals of Brentwood and Los Robles. The two principals believe the proposal is feasible, Sudaria said.

No board members objected to her recommendation.

The district is required to make a final facilities offer for next year to KIPP by April 1.

Without a long-term solution, Ravenswood will face this dilemma for several years as KIPP plans to grow through eighth grade by 2021, with a maximum total enrollment of 610 students.

"We would also welcome the opportunity to work with the district at the appropriate time to engage in discussions for a facility solution for the 2020-21 school year, when Valiant will fulfill its TK-8 charter," Kaye wrote to Sudaria this week.

Hmmm, I thought Gloria and Eichman CBO said that there was not space at Brentwood/MacNair? Where they lying? Were they really retaliating against Belle Haven Parents for protesting for the removal of Todd Gaviglio. The supper really have something against him no doubt.

All of a sudden Steve Eichman (CBO)and acting superintendent agreed that there is enough space to accommodate KIPP at the same site. I Remember Gloria and Eichman saying that there was no room for KIPP to expand at the same site, and Pulido insisted that Belle Haven and Willow Oaks was the place for them to go. Now that the bad apple has been removed, Eithman finds out that there is room, and Pulido stops saying that Belle Haven or Willow is the place for KiPP to go.Glad one of the bad apples are out. We still have to very rotten apples.
In regards to:
Kaye (probably meant to say Kate) also expressed concern that the district's proposed pro-rata share of Ravenswood's total facilities costs for KIPP has gone up significantly, to about $1 million. This accounts for about one-fifth of the district's total facilities budget, which is "disproportionate" to the amount of space KIPP occupies, Kaye wrote.

This proves that Mr. Eichman is not good at Math, I am wonder how many more mistakes has he made and nobody has caught them. If he messes up like this when it comes to the budget the district is in big trouble. Hope they go for the full audit. This will be the right thing to do to see how things really are. Hope that no more corruption is allowed and that the majority of the board members who vote to get Gloria out, continue to look for signs of corruption and stop it right away, otherwise in no time things will be the same.

Can you stay healthy without making more trash?
By Sherry Listgarten | 7 comments | 3,338 views

Think about helping others in our coronavirus-affected area
By Diana Diamond | 7 comments | 3,030 views

The University of California’s flexible policies during COVID-19
By John Raftrey and Lori McCormick | 6 comments | 1,697 views