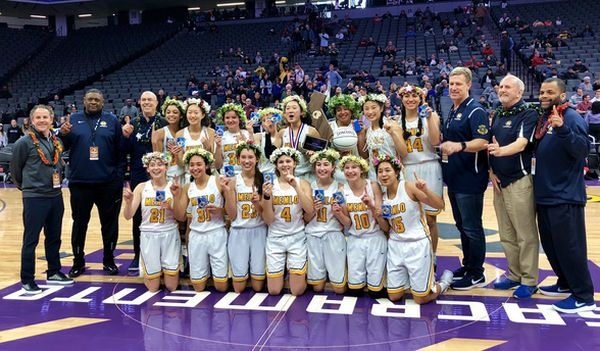 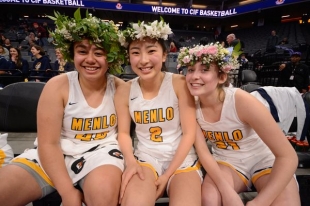 The Menlo School girls basketball team put on a show on the big stage, leading nearly the entire way in a 70-63 win over Rolling Hills Prep for the state Division II girls basketball championship.

And without getting too far ahead of the team’s achievement Saturday at the Golden 1 Center in Sacramento, just think what it portends for the future. There was not a single senior in Menlo’s rotation and only one junior.

Avery Lee looks for an opening. Photo by Eric Taylor /1ststring.com.
"The neat thing is they all like each other,'' Menlo coach John Paye said. "They have a great bond and team chemistry. And it all starts with our point guard. She plays with such a bundle of energy and joy. Everyone loves her.''

The point guard Paye refers to is sophomore Avery Lee, who flirted with a triple double, finishing with 15 rebounds, eight rebounds and nine assists.

“It feels great,’’ Lee said of winning the state championship. “I’m so proud of every single player on the team, so proud of what we’ve done this season. I love every single person on this team. We’re all sisters.’’

The Knights came out hot and never cooled off much. Maeia Makoni set the tone with a 3-pointer that broke a 2-2 tie. Makoni, as a junior the team’s virtual elder statesman, made three 3-pointers in the first quarter and sophomore Coco Layton made two as Menlo (26-5) zoomed out to a 21-9 lead at the end of the quarter.

"It makes it a lot easier when the other team is chasing you,'' Paye said.

Rolling Hills Prep (27-5), the defending state Division IV champion, tried to utilize its decided size advantage, pounding the offensive boards for multiple shots on numerous possessions, but was never able to catch up.

Menlo, which enjoyed its biggest lead at 26-9, was up 34-25 at halftime. Rolling Hills reduced Menlo’s lead to 3 at 49-46 late in the third quarter and 51-48 at the start of the fourth quarter. But that was as close as it would get. Lee responded with three free throws and one of her patented fastbreak layups to extend Menlo’s lead to 56-48, and the Knights were never threatened from that point on.

Layton had one of her best games of the season. After knocking down five 3-pointers in the NorCal Division II semifinal win over San Joaquin Memorial, she made five more from beyond the arc against Rolling Hills, scoring 17 points and pulling down 11 rebounds.

Freshman post player Sharon Nejad had a tough matchup against Rolling Hills star Clarice Akunwafo, a 6-4 sophomore already being recruited by USC. But she finished with yet another highly productive game with 12 points and 10 rebounds. It was her seventh consecutive game scoring in double figures and fifth in her last six outings in double figures in rebounds.

And Makoni, who got the team off to the fast and confident start with her nine first-quarter points, had her minutes limited by foul trouble but finished as the fourth player in double-figure scoring with 10 points.

Menlo made 10 3-pointers in all. Danielle McNair came off the bench to nail two of them and finished with eight points.

Georgia Paye, the head coach's daughter, a player who is often employed as a defensive specialist, scored six points and went 4-of-4 from the foul line in the final minute.

Singapore's oldest cafe was about to open in Palo Alto. Then, the coronavirus hit.
By Elena Kadvany | 4 comments | 7,559 views

Repairing a Disagreement with your Beloved & “Physical” vs. “Social” Distancing
By Chandrama Anderson | 2 comments | 3,079 views