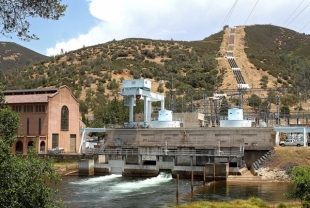 Hetch Hetchy water is carried through penstocks, top right, and heads to the Moccasin Powerhouse where it generates electricity that is used for municipal services in San Francisco. Photo by Veronica Weber.

16 people like this
Posted by Don't be EVIL companies
a resident of Another Palo Alto neighborhood
on Mar 2, 2019 at 11:10 am

Why don't our municipalities have to be realistic about water and growth? Why do existing residents who sacrificed for decades to be here have to suffer while developers can use all the water they want and add as many people for the benefit of companies that really should move somewhere more sustainable to grow? (Multiply the number of innovation centers!). I spent decades working toward having a garden, which is my most beloved pasttime, only to have to let it die for the drought, while up the street, a developer let a hose go right into the drain running water all day. Since the drought ended, I don't have the funds to get someone else to re-establish the garden, and haven't been able to myself. At my age, I've had a garden all of two seasons of my life, after all that sacrifice. I won't have a home for long anyway.

Selfish, selfish, selfish companies, don't have any regard for what they are doing to our region, and idiot leadership tries to do water planning as if the growth doesn't matter.

Why should they be looking ahead to restrictions that affect everyone equally, when the selfish companies have insisted on crowding everyone else out in the last 10 years? Crowding out the traffic circulation, crowding out the skylines and daylight and views we used to have, crowding out the safety margins, crowding out the fresh air, crowding out the local retail. We're told the new arrivals don't care about having space (which is actually false, no one ever mentions that most people commute to have a better quality of life, i.e., single family home, which the majority of milleniaals want, not just for affordability) and that they want to be more sustainable - but I have to let my garden die while they crowd in more and more entry level workers. This is a huge part of my quality of life, and an infinitessimally small fraction of the water use being added to our region monthly.

Planning for future water rations without any regard to the unfairness of the overdevelopment is just wrong.

10 people like this
Posted by Resident
a resident of Another Palo Alto neighborhood
on Mar 2, 2019 at 11:38 am

When the drought was severe, the households were expected to reduce water consumption or else (we were definitely threatened with all sorts), but it seems that hotels, gyms, spas, hair salons, even schools, could do as they like with water consumption because they were businesses.

When each household is allotted a quota to reduce usage, it takes little account of how many people live in the household. A family of 6 will use a great deal more water than a family of 2. A family with say gym membership can use the gym for showers. A family that does sports or has very young children, will produce more dirty laundry than a family of professionals who wear clothes more than once between laundering.

When Palo Alto limits restaurants to only serving water to those who ask, they are not thinking of the amount of water a customer drinks, but the amount of water necessary to clean the glass. However, they also tell us not to use paper cups and now we are expected to throw clean items into recycling although not to use water doing so.

This year we are having abundant rainfall, but the drought mindset of water conservation is a good thing. However, water authorities are emptying reservoirs to prevent flooding. That water is basically just going to waste, rather than being collected for future usage.

Is it time to get more water holding tanks, reservoirs and such like. California population will continue to increase so water usage is not going to go down. Farmers producing crops that have high water usage are not going away. Individual households may be able to reduce but not enough to make the difference. California has to work better to produce more water. We have a long coastline. It is time to be practical and do what Israel does and use desalination plants.

Report Objectionable Content
Email Town Square Moderator
2 people like this
Posted by Annette
a resident of College Terrace
on Mar 4, 2019 at 1:16 pm


The fundamental principles and benefits of local control should never be taken lightly. Or given away.