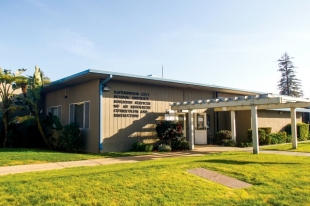 Gina Sudaria, the Ravenswood City School District's director of student services and a former principal, has been named acting superintendent while Superintendent Gloria Hernandez-Goff is on a paid administrative leave. Photo by Veronica Weber.

To the Article Writer:
You wrote:

Several parents and a district maintenance worker spoke in the superintendent's defense at Thursday's board meeting, urging the trustees to honor her two-year contract approved amidst community protest last spring. CORRECTION THERE WERE ONLY TWO PARENTS, ONE OF THEM IS THE DELAC REPRESENTANT, WHO ACTED AS GLORIA'S PUPET). I WAS IN THE AUDIENCE AND COULD HEAR HIM PROMPTING THE OTHER PARENT AND THE MAINTENANCE EMPLOYEE WHAT TO TELL AND HOW TO SAY IT). THE OTHER PARENT WAS A RECIPIENT OF THE FOOD BANK WHO HAS ALSO BEEN CALLED BEFORE TO COME AND SPEAK ON ON GLORIA'S BEHALF WITH THE THREAT THAT IF THEY DO NOT DO IT, THE FOOD BACK WILL BE CLOSED DOWN.

"I will ask (you) to respect our superintendent, Dr. Hernandez-Goff, because she has brought so much to our students," said parent Marco Duarte, president of the District Advisory Committee, which involves parents in the planning and development of district services. SORRY TO SAY, BUT THIS MR. DUARTE MADE A FOOL OF HIMSELF TO COME AND ASK THE TEACHERS AND BOARD MEMBERS TO RESPECT THE SUPPER. RESPECT IS EARNED NOT BEGGED. WE NEED A NEW DISTRICT ADVISORY COMMITTEE THAT RESPECTS THE PARENTS AND DOES NOT ATTACK THEM. THIS IS WHAT HE ALWAYS DOES AT MEETINGS WHEN PARENTS COME TO COMPLAIN.

Citing Hernandez-Goff's work to bring more arts and STEM instruction to the district and to invest in parent engagement, he said, "It's a slap in the face when you say she's doing nothing for the students." SLAP ON THE FACE IS WHAT THE INCUMBENTS DID WHEN THEY RENEWED THE SUPER'S CONTRACT LAST YEAR. AND HE IS WRITE WHEN HE GEST UPSET ABOUT PEOPLE SAYING THAT SHE WAS NOT DOING NOTHING. IN FACT SHE WAS DOING SOMETHING, SHE WAS SPENDING HER TIME ON BECOMING A MOVIE STAR BY SHOWING UP IN EVERY TV PROGRAM SHE COULD. THIS WAS BECAUSE OF BONILLA WHO SET THESE INTERVIEWS UP. I HOPE LORENA AND THE NEW SUPER DO NOT DO THAT TOO. THEIR JOB IS TO LOOK UP FOR OUT STUDENTS' EDUCATION. THIS IS ALSO SOMETHING DUARTE IS GOING TO MISS. BONILLA ALSO SET UP INTERVIEWS ON DIFFERENT TV CHANNELS FOR DUARTE SO HE COULD COME UP AND SPEAK ON BE GLORIA'S BEHALF. I GUESS HE WAS GETTING USED TO THAT AND NOW HE IS GOING TO MISS BEING THE CENTER OF THE ATTENTION. HE EVEN ALLOWED PULIDO TO USE HIS CHILDREN FOR PULIDO'S CAMPAIGNING SIGNS.
IT IS TIME FOR BONITA TO WORK FOR THE MONEY HE GETS, AT LEAST HE SHOULD GO TO COMMUNICATE THE STUDENTS ABOUT THE SAFETY RULES AND AT THE SAME TIME SUPERVISE THEM WHILE THEY ARE NOT IN THE CLASSROOM.

Thank you President of the school board for breaking down the votes in closed session for us. Sudaria is a strong choice and I am thrilled that she’s going to be Interim Sup. I’ve worked with her and know she’s hard working and ethical. Thank you the school board members who continue to support our community (Fitch, Sobomehin, and Gaona-Mendoza).

Report Objectionable Content
Email Town Square Moderator
18 people like this
Posted by Thanks to the 3 Who voted to get her out
a resident of East Palo Alto
on Mar 1, 2019 at 10:20 am

I am an employee of Ravenswood, and Sometimes I am afraid it is just a dream, and feel like Gloria is going to walk in and the employee's smiles will disappear. We hope Gloria stays out forever. Please, please board members do not allow her to come back. She was one the worst things that happened to our district.

Report Objectionable Content
Email Town Square Moderator
2 people like this
Posted by Correction
a resident of East Palo Alto
on Mar 3, 2019 at 5:35 pm

Flying: A letter from a reader
By Sherry Listgarten | 8 comments | 1,278 views