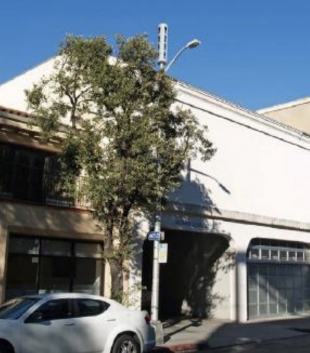 Palo Alto approved on Feb. 4, 2019 installation of Crown Castle equipment in cylindrical shrouds mounted on poles, similar to the design on this pole, which was part of a prior AT&T application. Photo courtesy city of Palo Alto.

Where did Fleming get the misguided impression that her small group of protesters represents a majority of Palo Altans? This issue has been aired for years and years. Her ideas have been heard many times. After much delay and compromise, her extreme views have been rejected. Time to accept the compromise and get over it.

Seriously? This is a crisis?!?
It is not like the so-called Ross Rd Bike Blvd that was horribly ill-planned and stealthily rolled over us via Trojan Horse; with bump outs and roundabouts that force school children to bike between and among moving vehicles which are often operated by frustrated motorists. Nobody has been put in harm's way by this cell tower effort. In fact, they will likely find themselves safer for it when they are able to call for medical help or when cell towers and PAPD can better pinpoint location coordinates of victims and assailants in the almost-daily bike accidents, hit-and-runs, pedestrian attacks, robberies, sexual assaults, home invasions, or numerous violent crimes we read about or experience firsthand.
Try to keep some perspective here. There are far bigger problems that need our collective attention. Let's be safe out there and look out for one another and especially for the twelve thousand PAUSD children who share our roads, bike lanes, and sidewalks.

9 people like this
Posted by Resident
a resident of Another Palo Alto neighborhood
on Feb 5, 2019 at 2:35 pm

There is another report of crime in downtown. We need our phones to be dependable for our safety as much as all the other reasons.

We have so much ugly telephone poles and infrastructure, but the City does nothing to get them underground.

Give us good cell coverage, please.

Kniss groomed and supported Cormack and Cormack is repaying with her votes. Cormack is used to dealing with big money interests, given her fund raising experience. Many voted for this 'nice lady' unaware of her corporate loyalties.

Report Objectionable Content
Email Town Square Moderator
11 people like this
Posted by Let's have a recall
a resident of Downtown North
on Feb 5, 2019 at 4:37 pm

Developers clique- fortunately the majority of the council realized that federal law trumps a very vocal minority. And it should be pointed out that the headline of this story is ridiculous? How many people really cares about this? Who says that Fleming represents residents? Another attempt to manufacture outrage on TSF. But I see that kuo will occupy the obstructionist rule that Holman occupied for 9 years. I am sure holman groomed kuo. And of course holy can also count on Dubois to also try to stop progress.
But if hot are so unhappy with the council may I suggest a recall?

The article isn't clear about this point: Crown Castle is known for working with multiple wireless carriers. Does anyone know if this proposal will serve multiple carriers from each installation? If so, that means fewer installations needed in the same area. For example, there is no reason why AT&T and T-Mobile couldn't share the same Crown Castle installation since they use compatible technology.

Another point that is not clear is what the amplifier boxes are like. The article implies that they are small. Are they noisy, like the older, existing AT&T boxes? Since the new ones are supposed to be "small cell", it could be that less power is needed and the boxes might be quiet(er) as well as small(er). It would be nice if the article covered some of this.

This city council is the enemy of homeowners in Palo Alto.

Thank you City Council. We'll all be safer with better coverage and the fears the opposition have put up have been debunked years ago.
Well done!

Report Objectionable Content
Email Town Square Moderator
4 people like this
Posted by no more missed calls
a resident of Another Palo Alto neighborhood
on Feb 6, 2019 at 7:48 pm

In a City in which distrust of City government
has been on such a precipitous rise, with
ample reason, this new Council and new Mayor chose to just dismiss the request by residents, and the
ARB, for further consideration and review of this matter. It is not just disappointing,it is
shocking. We can't take any more "missed calls"
in Palo Alto like they just had in the football
playoff.

Flying: How to lower your impact
By Sherry Listgarten | 10 comments | 2,300 views